For an intermediate-term fundamental and technical viewpoint, see the Crude Oil Forecast.

Since bottoming in early October oil has been a bit of a mess as it tries to gain footing and reverse the down-move that unfolded during September. The overlapping price action during the past month suggests that we will eventually see another leg lower, validating the channel as a worthy bear-flag.

But for that to happen we will need to see the lower parallel break, first, before running with a bearish bias. A break of the lower parallel validated by a drop through the October 31 low at 53.66 should have WTI rolling downhill towards the 50-line, and potentially the 2016 trend-line, a target that has long been on the board.

At the immediate moment oil is running into the 200-day, which may be the end of the current up-move. But a break through the long-term average and the upper parallel will quickly take the bite out of the bear set-up, positioning for a move to trend-lines running lower from October 2018 and April of this year. 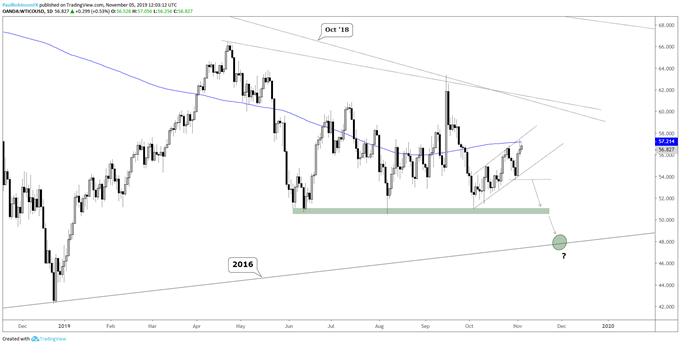 Obviously, Brent is taking on a similar shape to its U.S. counterpart, staying confined in a channel. One of the differences is where the 200-day is situated, it’s a bit higher near the trend-lines from October 2018 and from April of this year.

Also, should the lower parallel break and develop into a move below 59.60, the 2016 trend-line is quite a bit closer for Brent than WTI, as well as the lows from August and October. It makes the technical landscape a bit tighter in the UK contract.