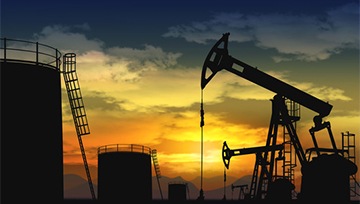 WTI is up against range and trend-line resistance

WTI crude oil is trading up against the top of the range dating back nearly a month ago. The top of the range is also in confluence with the April trend-line, while the 200-day lies in the upper portion of the range. On Thursday, oil attempted to break above these levels, but was swatted lower and as a result a reversal candle was formed.

The rejection helps keep pressure on oil despite it having then rebounded to end last week. Even if price rises above the reversal day high it may still be stopped in its tracks as the October trend-line runs down just above. It will take a close above Thursday’s reversal and the trend-line to help give oil a shot at rallying.

A turn down from here is likely to have in focus the low-end of the range situated around 53. A range-break would be reason to look for the June and August low near 50 to be tested. Tactically, current levels, given the technical backstops in place, make for an attractive risk/reward proposition for would-be sellers.

Brent is trading slightly stronger in the very near-term, but generally remains weaker than the U.S. contract. It is trading just below the Thursday reversal-day high of 62.82, however, it is facing resistance via the April trend-line. This gives would-be sellers a spot to look for price to reverse down without having to use a wide stop.

A break above the trend-line won’t put Brent into the clear, but will give reason for sellers to tap on the breaks and provide buyers with the possibility of building upside momentum. In the event of a turn down the bottom of the recent range under 58 will be first focus, followed by the trend-lines running up from 2016, most notably the one off the January low of that year. 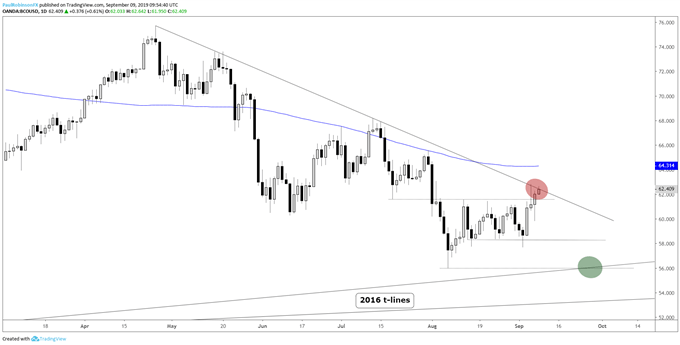