Pullbacks have been shallow, and intuitions are not overly long, which could mean that crude has further upside to go. Traders soon learn the markets do not know the meaning of ‘too high’ or ‘too bid’ as momentum and fundamentals as well as sentiment are ever changing. The current momentum picture looks to take the petrol complex higher absent a breakdown through support currently at $81.70/bbl.

The Most Surprising Number In The Commitment Of Traders? 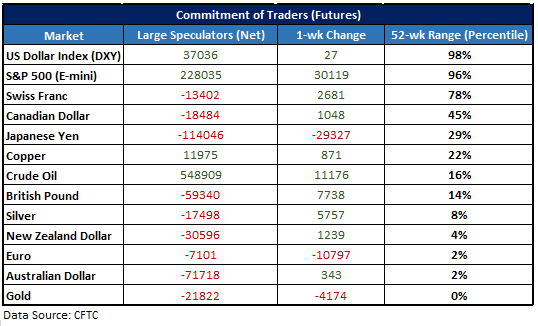 The chart above shows how institutional positioning sits relative to the 52-week range. When markets are near year-to-date or 52-week extremes like SPX500, you would expect long positions to show the most extreme positioning in the last 52-weeks. However, look at crude positioning.

Despite Venezuelan output in a virtual free-fall and uncertainty about access to Iranian supplies, institutions are holding long positions within the lowest quintile in 52-weeks. Due to FOMO, a strong breakout could cause a chase to follow that would cause traders not just to hold option exposure on crude, but futures as well that could bid up the front-month contract further.

Unlock our Q4 18 forecast to learn what will drive trends for Crude Oil into year’s end.

Brent Insight from the Futures Curve

The futures curve is a tool that speculators and hedgers or corporates alike look to as the perceived fair value of an asset at different points in time due to the available information. The back of the curve is often a helpful source of information about sentiment and perceived effects of current policies.

The December 2020 contract that makes up the back of the brent curve has been rising steadily. Despite arguments of a ‘well supplied’ oil market a strengthening tail of the curve tends to show a tighter oil market for longer. Expectations for a tighter market is exactly the argument made by Fatih Birol of the IEA who said that unless OPEC and their allies turn on the taps, the market is going to feel a squeeze as we enter a ‘red zone’ as the global economy is losing momentum.

Birol also noted in a Bloomberg interview that, ‘if there are no major moves from key producers, the fourth quarter of this year is very, very challenging.’

Once again, the only complaint bulls likely have about Brent is that the trend has been too strong to help identify re-entry points. However, the hammer candlestick on Monday’s price action saw the pair briefly drop below the 9-day midpoint before rising again and is currently set to close above the 9-day midpoint at $84.578/bbl.

Adding to trader’s confidence of the Elliott Wave persuasion is that the strong move from $78 happened at the end of a triangular correction before exploding higher to $86.65 for an 11.36% rally.

On a longer-term chart, traders can see that since May, when Brent broke above $52/bbl, momentum has remained bullish with MACD (5, 34, and 5) in positive territory. Traders may want to study the Q4 2010 and Q1 2011 rise a break above $90/bbl (trendline from 2008 high) could set up the FOMO breakout discussed earlier.

Traders will also see that momentum per Ichimoku (bright green line on the chart that lags price) continues to show bullish momentum. If nothing else, it should encourage short traders to wait.

Additional insights for Brent can be found in the options market that is showing $100 calls trading at large volumes. Additionally, backwardation via the December 2018- December 2019 brent contracts, while off the highs of the year, continue to show a healthy front-month premium that should also discourage less brave shorts.

Not familiar with Ichimoku? You’re not alone, and you’re in luck. I created a free guide for you here

More Support For Your Trading:

Our trading guides bring our DailyFX Quarterly Forecasts and our Top Trading Opportunities, and our real-time news feed has intra-day interactions from the DailyFX team. And if you’re looking for real-time analysis, our DailyFX Webinars offer numerous sessions each week in which you can see how and why we’re looking at what we’re looking at.