“I did what I had to do, and saw it through without exemption

I planned each charted course, each careful step along the byway

And more, much more than this, I did it my way”

I doubt that OPEC listens to Frank Sinatra. However, the lyrics and the song above seem apropos after Trump requested that OPEC “get prices done now!” OPEC has worked hard to stabilize prices with allies like Russia, and manage the depletion of Venezuela and Iranian sanctions that have led to four year highs in crude.

The markets looks to continue bubbling up unless positioning or production aggressively change course, which is not a higher probability play at the present. 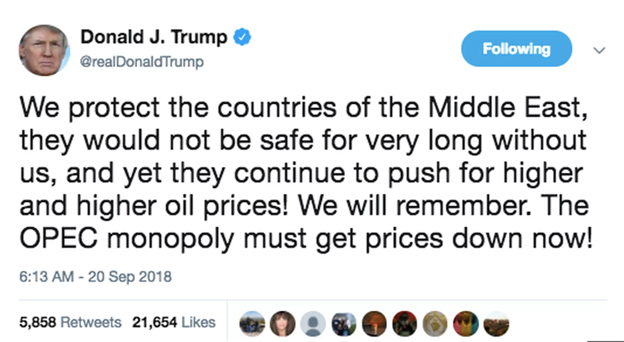 That tweet was conveniently sent ahead of the Algiers meeting where OPEC decided not to turn the spigots back on to relieve the tight oil market that is leading to higher prices. Comically, while the Saudi Oil minister says it is ‘not true’ that OPEC is pushing up prices, Iran’s OPEC Representative Hossein Kazempour has said that crude prices “would be cheaper” if Trump would stop tweeting. I don’t think we can count on that.

After the non-decision by OPEC to ramp up production to make up for Iranian sanctions, the option market went to work. Specifically on calls of outsized gains in crude.

Per Bloomberg, trading volumes on Brent crude calls for $100 and $110 call options (the right, but not the obligation to buy) hit record levels. Traders should also not discount the weakening US Dollar, which would grease the skids for higher crude, and other commodities. 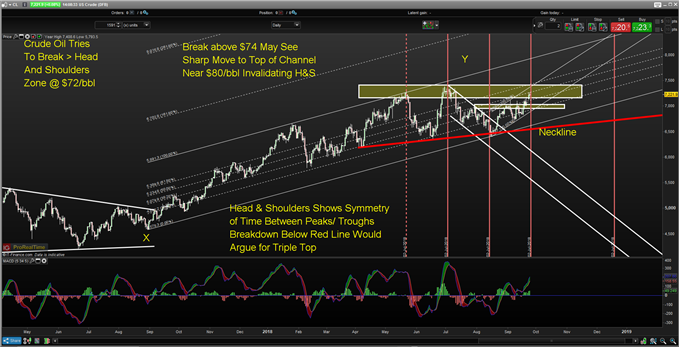 The chart above shows a key bullish price channel that WTI crude has traded from August 2017 to May with a sharp upside impulse. Since May, the price has moved sideways in a volatile fashion with a move as high as $74.08/bbl, and as low as $63.90/bbl.

This range makes up our potential bearish head and shoulders. Two and a half key events need to take place for a bearish breakdown or follow through to lead to a broader reversal: 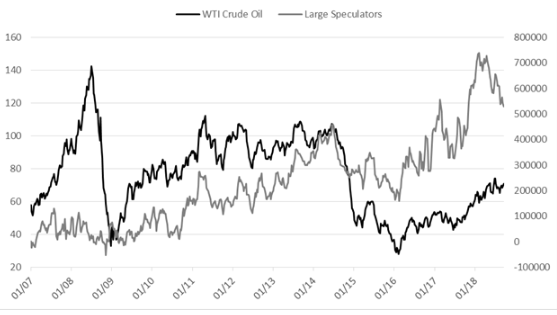 What any technical trader should equally be on the lookout for is a failed pattern. Despite a bearish technical pattern at play, the fundamental environment remains bullish and the trend unbroken.

A breakdown would be a shock (though Trump would take credit,) and an invalidation of the bearish head and shoulders would further support the fundamental bullish backdrop.

Our trading guides bring our DailyFX Quarterly Forecasts and our Top Trading Opportunities, and our real-time news feedhas intra-day interactions from the DailyFX team. And if you’re looking for real-time analysis, our DailyFX Webinars offer numerous sessions each week in which you can see how and why we’re looking at what we watch.