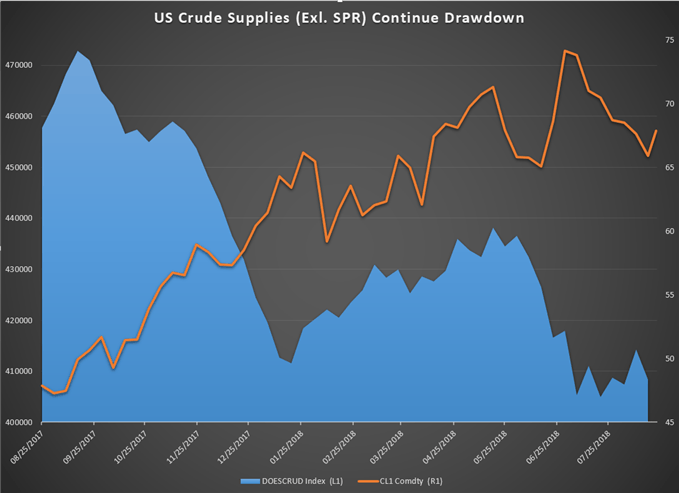 The US Remains Thirsty For Black Gold

Markets are in high demand-season in late-August, but in prior weeks the trade war rhetoric had taken over to make fears of lower global demand the running theme that markets were pricing. WTI & Brent now is only trailing the NASDAQ as the best performing global asset showing it holds a similar resilience as equities despite concerning narratives that continue to float.

Looking to the DOE data on Cushing Oklahoma stockpiles, there has been a 62.5% drop from the late 2017 high of 64.5million barrels to the current 24.2m level. Aggregate supplies per the DOE show a 41 million excluding the SPR down from 47m last September. 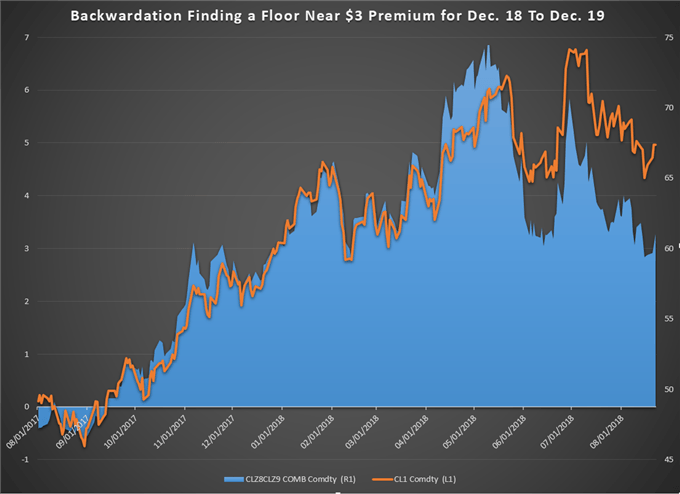 The chart above shows the premium of the December oil futures contract relative to the December 2019 contract. Should the front-month trade at a discount to later-dated month (it hasn’t since September), bears likely be emboldened. However, the premium through the divided global political scene has kept the front month premium near $3, which would likely limit the downside to crude oil.

There’s been a favorable development in crude via a rally in December 18-December 19 spreads alongside a drop in brent implied volatility that has fallen to the lowest level in 4 weeks all of which is alongside a massive drawdown in US oil supplies.

This trifecta has aligned with a jump higher in Crude for five straight days, and now traders are wondering if we’ll soon see a move back to $70/bbl in WTI. While oil is ~8.5 percent below the three-year high reached in early July, traders have seen strong support near $63, which aligns with the all-important 200-DMA.

Additionally, MACD (5,34,5) may also be showing a basing of bearish momentum while the spot price of crude oil has moved above the bearish channel. Technically, this combination of bearish momentum basing alongside a bullish breakout will now turn focus to $69.19, the August high. A break above here may mean that like stocks, rumors of the death of the current bull market (at least in the US) are greatly exaggerated.

Our trading guides bring our DailyFX Quarterly Forecasts and our Top Trading Opportunities, and our real-time news feedhas intra-day interactions from the DailyFX team. And if you’re looking for real-time analysis, our DailyFX Webinars offer numerous sessions each week in which you can see how and why we’re looking at what we watch.