On Tuesday, US president Donald Trump decided that the Joint Comprehensive Plan of Action (JCPoA) was not worth the paper the deal was printed on and decided to tear the whole thing down rather than re-build from a perceived faulty foundation. A headline announcement came from the reinstatement of sanctions on Iran that to some mirrored a similar tone as President Bush on Iraq in 2002. Either way, it appeared that Iraq’s oil production would be barred from a significant percentage of the global economy when the physical market is already tight as per backward-dated calendar spreads.

Shortly after the announcement (14:00 EST), crude traders began doing what they do best over the last few months, buying crude. The US Treasury announced they were giving their allies 180 days to remove themselves from Iranian oil deals of which France may be most inconvenienced.

Treasury Secretary Steven Mnuchin noted that his “expectation is not that oil prices go higher, “ and that they will allow countries to seek “significant reduction exceptions” at the end of the period if they reduce the volume of purchases during that time.

WTI crude hit an intraday low on Tuesday at $67.63/bbl ahead of the announcement as rumors were being floated that Trump may decide to salvage the deal instead of scrap it, as he later declared. 15 hours later, the price of WTI crude oil jumped 5.2% to $71.17/bbl, and the uptrend remains in play. Brent crude prices also traded to $77/bbl, the highest levels since November 2014.

An additional note that I shared in Tuesday’s FX Closing Bell webinar was that implied volatility for crude oil per the CBOE Oil ETF VIX was falling after the announcement. While there is no hard and fast rule, markets tend not to top and then aggressively drop in a falling volatility environment with supportive fundamentals like we see in crude.

Adding to the bullish evidence was Tuesday’s overlooked API data that continues to color in the bullish backdrop ahead of Wednesday’s EIA data. 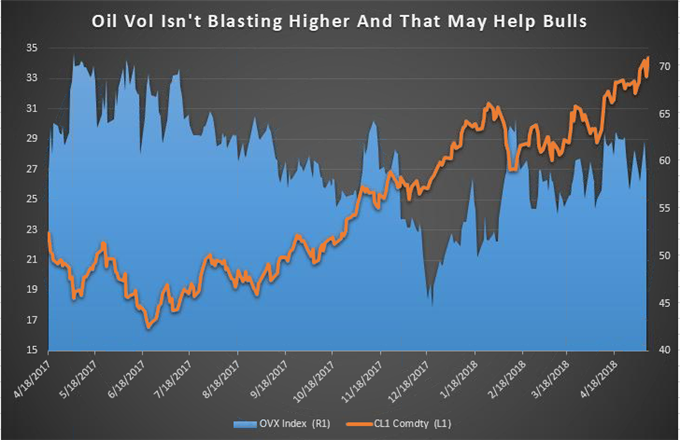 As catalysts continue to build for crude oil staying elevated, calling a top appears to be a short-term exercise in futility. The chart does show inordinate strength, but that’s fair to say when the market is up 17% YTD.

As noted before, calling tops makes for much better marketing than it does trading. A more appropriate call, if one needs to be made (while I follow the trend) is that prices may soon revert to a sideways movement given that the Fibonacci expansion target was just tagged.

However, the tag of an upside target doesn’t mean the trend is over, ratherthat the strength was enough to carry the market to the target.

The new focal support for traders should be the low on Tuesday, that price rocketed from at $67.23. Want more? Ichimoku focused traders should curb their bearish enthusiasm above the 26-day midpoint at $66.42. A hold above this level would likely favor a move to the top of the bullish channel toward $73/bbl.

Not familiar with Ichimoku? You’re not alone and you’re in luck. I created a free guide for you here

Are you looking for longer-term analysis on Crude Oil and other popular markets? Our DailyFX Forecasts for Q2 have a section for each primary currency, and we also offer an excess of resources on USD-pairs such as EUR/USD, GBP/USD, USD/JPY, AUD/USD. Traders can also stay up with near-term positioning via our popular and free IG Client Sentiment Indicator.

Our trading guides bring our DailyFX Quarterly Forecasts and our Top Trading Opportunities, and our real-time news feedhas intra-day interactions from the DailyFX team. And if you’re looking for real-time analysis, our DailyFX Webinars offer numerous sessions each week in which you can see how and why we’re looking at what we’re looking at.