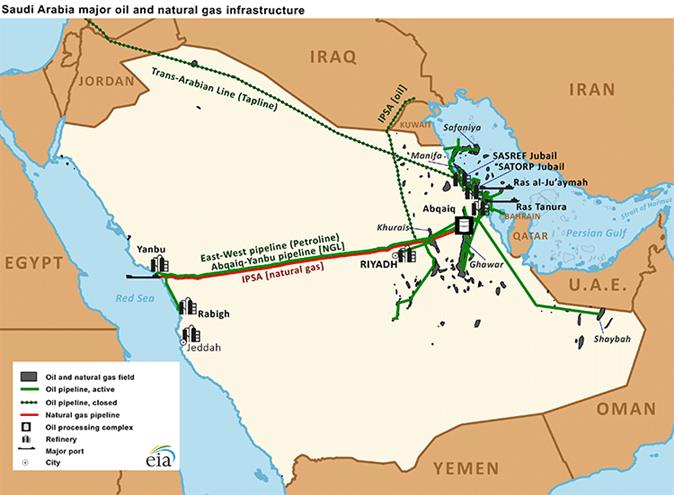 If a crude oil trader were to look just at the weekly EIA Crude Oil Inventory Report, they’d likely assume that Crude would be trading lower. If they acted on that assumption, they would also be in the red on the trading day so far.

Instead, a handful of geopolitical headlines to Crude Oil to the highest levels since 2014 as the EIA weekly data took a bad seat, and at a good time too for crude oil bulls.

Commodities are naturally susceptible to supply and demand shocks, and few things cause such shocks as potential attacks on large energy-producing regions. On Wednesday, around the time of the weekly EIA Crude Oil Inventory report, a Bloomberg Hot Headline flashed that ‘Saudi intercepted a missile over Riyadh.’

The same week that the US has threatened to pose sanctions on OPEC’s third largest supplier, Iran this report showed that missiles from Yemen did target Saudi’s defense ministry per Reuters.

The map above from the EIA shows how Yemen is targeting Saudi’s pipelines and key infrastructures in Riyadh. Earlier this week, news also broke that a Saudi oil tanker was attacked off Yemen showing the fragile political environment currently at hand.

In addition to the headline of the Saudi missile interception, reports surfaced on Wednesday that Trump is pledging to attack Syria. Traders should also remember that Venezuela continues to face the risk of significant output losses this year due to their domestic economic crises.

This week’s EIA headlines mirror data from the Shendong port in China showing record stockpiles potentially indicating a stall in demand. Despite the headline negative inventory data, Crude and Brent were up by more than 2% on Wednesday.

The broad bullish trend on Crude Oil paused for much of Q1. However, the initial days of Q2 seem to show that the consolidation may be over and that the broader bullish pattern and momentum are set to continue.

Without a sharp break below $61.8/bbl (April opening range low), traders should anticipate a resumption to new highs with the potential for further bullish shocks to take the price of WTI Brent toward $70.16, the 100% Fibonacci extension from the 2016 range extended from the 2017 low at $42.07/bbl.

Ichimoku is applied to this chart above. If you want to learn more, I'd recommend reading the FREE guide I put together here. Just click 'Advanced Guides.' 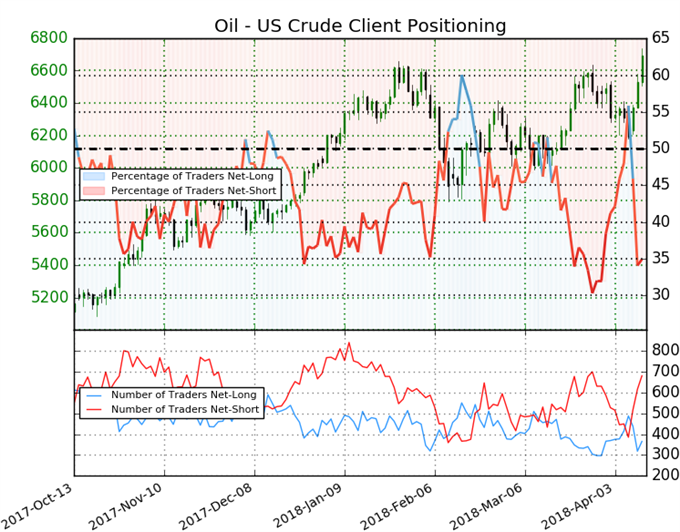 We typically take a contrarian view to crowd sentiment, and the fact traders are net-short suggests Oil - US Crude prices may continue to rise. Traders are further net-short than yesterday and last week, and the combination of current sentiment and recent changes gives us a stronger Oil - US Crude-bullish contrarian trading bias (emphasis mine.)

Bottom Line: Selling Crude may feel good upon entering as the price is trading at the highest level in over three years, but the potential for bullish shocks remain and favor holding a bullish bias.