The production from U.S. supplies has appeared unstoppable as weekly inventory data continues to break records. The EIA recently came out and predicted 11mbpd in Q418, which is an aggressive increase from the current levels.

US Crude Producers Find a Likely Buyer With a Healthy Appetite

However, the US producers do not seem to be producing in pure speculation. While US producers are producing like there’s no tomorrow, China appears to be importingin a similar fashion. A recent report from China General Administration of Customs showed that China’s oil imports in January were the most in the world since 2010 when Crude was accelerating higher to and above $100/bbl.

Per Bloomberg, the ~9.6mb/d of imported crude oil January is roughly the equivalent to nearly the output of the word’s three top producers. Therefore, it is easy to point fingers at US E&P for having too aggressive of a production strategy upstream, but if the demand is there, they would see themselves as negligent by not meeting their customers demand. Drill on!

Institutional positioning data has shown that hedge funds are pulling back from their record-long positioning per open interest data. The story for traders will be if traders come in as price sits near structural support. A failure for the price to break and close below $59 should keep the broader move since H2 2017 viewed as bullish. Only a breakdown and approach to the December low of $55.85/bbl alongside a washout in institutional positioning would favor a broader shift in Bullish sentiment.

Naturally, institutions are quick to take money off the table when the models say so, and the jump in volatility combined with recent gains may make them more likely to do so and make crude oil susceptible to test support levels mentioned below.

Institutional Positioning Is At The Top Of Its 52-Week Range

While some wind has come out of Crude Oil’s sails, it is likely too early to call the game over. Crude Oil has moved albeit, rather quickly to the Ichimoku Cloud on the daily chart. The Cloud in relation to current price occupies $60-$61 on the chart. The crucial next level of support would be prior resistance from the November 24 high at $59/bbl.

Should price break and close below this zone, traders should start to look for a broader pullback, given the overextended bullish positioning that may close out their long trades at the December low of $55.85/bbl.

A hold above the $60/61 zone would favor keeping sights on the 100% extension of the initial move off the 2016 low from the June 2017 low at $70.01. A bullish resumption would be confirmed by the lagging line of Ichimoku (Dark Green line) moving back above the price that would show bullish momentum is riding high again.

Ichimoku can be seen as a trading system or an indicator. Learn more here

Unlock our Q1 18 forecast to learn what will drive trends for Crude Oil at the open of 2018. 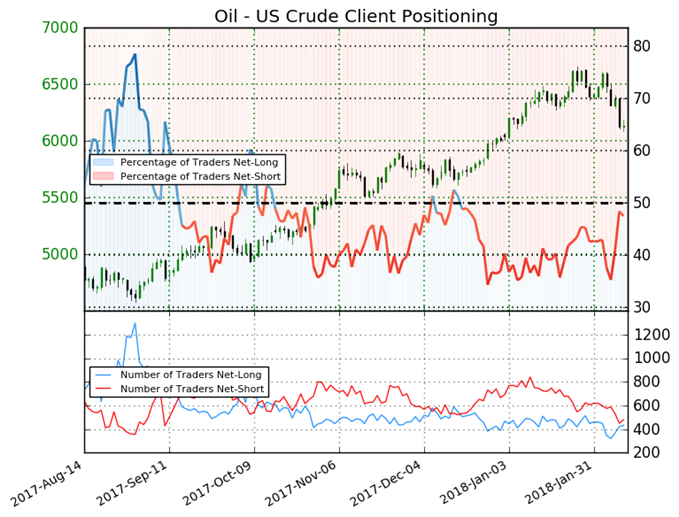 We typically take a contrarian view to crowd sentiment, and the fact traders are net-short suggests Oil - US Crude prices may continue to rise. Positioning is less net-short than yesterday but more net-short from last week. The combination of current sentiment and recent changes gives us a further mixed Oil - US Crude trading bias.

Bottom Line: Traders are defined by their lack of patience in realizing a profit, which could make the historically long intuitional position in Brent an argument for more downside.

Discuss crude oil and other markets your trading and watching with me below!