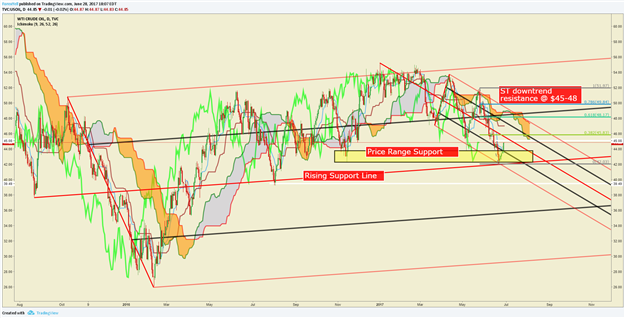 You could argue that a supply glut is easier to fix than a demand glut and thankfully, we appear to be facing the former. The concern and focus on when the supply imbalance will be fixed is the reason you and many other traders carefully watch the weekly EIA numbers, which had a slightly disappointing headline, but overall encouraging takeaway message.

In short, Inventories did see a bump higher, but the jump was +0.1% while Cushing, Oklahoma inventories (the largest delivery stock in the US) fell for the sixth straight week. A cause of concern that was raised on Wednesday was a Dallas Fed Survey showing Oil executives expect supply to remain abundant relative to demand until H2 2018.

There are two developments in the oil market that you should consider that could precede an aggressive move higher as the calendar shifts to H2 2017. First, ICE Futures Europe data shows short positions in Brent are at their highest levels since record keeping began in 2011. While this does not immediately indicate a rally, a further move higher in oil prices would likely encourage a violent short-covering rally though resistance from $48-$50/bbl is expected to hold.

Bears tend to be very impatient traders so that a move higher in the price toward month’s end could bring a strong snap back that could leave short traders wanting to cover and start fresh in July. Second, per IGCS, a definitive rise in short positions and pull back in longs is developing (second chart below). We typically take a contrarian view of crowd sentiment, and recent changes in sentiment warn that the current Oil - US Crude price may soon reverse higher despite the fact traders remain net-long.

The price has recently bounced off rising support and oscillators (not pictured) are rebounding higher from their range lows, which would also favor a technical bounce from being oversold. Another positive technical development is the price overlap from the interim low in May near $44.50/bbl that would indicate choppiness that provides a further argument to a move higher.

Crude Oil Sentiment: Rise in Bearish sentiment may be showing a bounce higher is underway 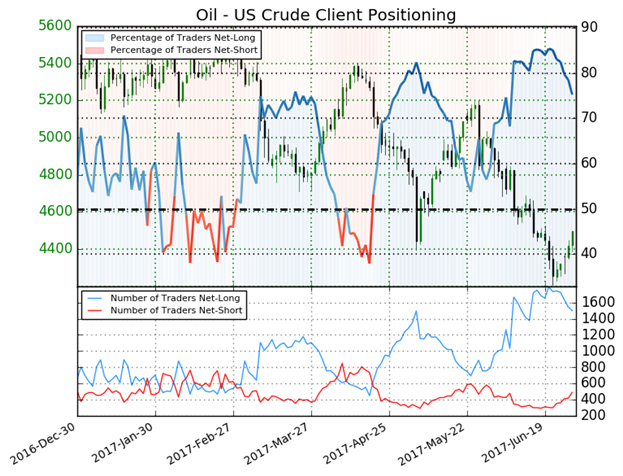