Crude Oil has fallen despite all the support OPEC has provided to Crude Oil Bulls. Either way, it appears more is needed to prevent buyers from selling and shorts from piling on to the pain. Wednesday will provide traders with the weekly EIA inventory report, which is expected to see the ninth straight fall. A future market occurrence of Contango, where near-term contracts trade above longer-term expiries has narrowed between July & August contracts, which could help explain the support found in Oil prices on Tuesday.

A larger concern is that Oil continues to trade below the psychologically important $50-mark, as it has since the OPEC announcement that cuts would be extended into 2018. Much of the weakness in price has been appropriately blamed on US shale production, but a possible drop in inventories on Wednesday could help support price further and help push the market back toward the important $50/bbl level. Regardless of the inventory number, which will affect the front-month futures contract, the EIA US crude output forecast that was released on Tuesday could also raise concerns that oversupply will remain a problem. The EIA forecasted that daily US production would reach 10.01 barrels a day, which surpasses the 1970 record of 9.6m bbl. You can see why the lack of positive economic surprises along with record Oil production is putting a cap on high prices are likely to rise.

When looking at the charts, it’s fair to be optimistic despite the fundamentals. You can see we are in a battle of two channels. A longer-term channel is drawn in red, where price is in the lowerquartile and has previously bounced from and shorter-term channel (blue) that also has found support the lower bound of the longer-term channel. These charts do not predict the future, but a failure for these levels to hold (i.e., a strong price breakdown below $43/bbl) would open up the argument that we’re in the process of a fundamental shift in the Oil market that could mean we’ll soon see a test of $40/bbl. A hold of the zone would open up the argument that we may bounce to back toward $52/bbl where we were in anticipation of the OPEC announcement where traders were buying the rumors to sell the news. 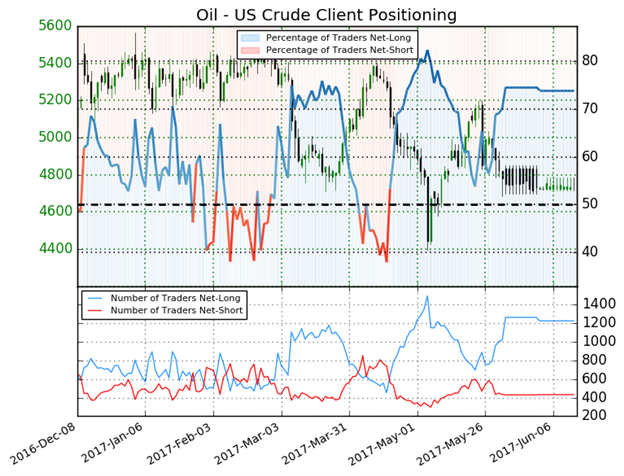