Crude Oil has shown volatility on Tuesday afternoon ahead of the DoE data on news that Libya’s largest Oil field confirmed Force Major and will bring production in Libya down to 560,000 barrel a day from its previous range of 700-800k. The closed pipeline accounts for ~20% of Libya’s output, and early reports are blaming fighting between armed forces as the reason for closure, but there has not been confirmation. The welcomed news will contend with Wednesday’s US production data, which is expected to further add to the fear that oversupply will weaken OPEC’s efforts.

On the charts, the technical focus has solely been on the 200-DMA, which has historically been a key divisor of the market between Bullish and Bearishness. The 200-DMA currently sits at $48.62/bbl as of Tuesday afternoon and price looks set to push lower.

The price action in late March has looked like consolidation, but one concern worth mentioning is the strong bounce in RSI(5). The bounce in RSI(5) looks corrective, which favors a trend continuation move lower and possibly to the $44/40 zone in the coming weeks if further weakness surfaces.

The price zone in focus if we continue under the 200-DMA encompassing the 38.2-50% retracement of the February-January price range that also houses the November low and the Median Line of Andrew’s Pitchfork drawn off the key pivots in mid-2015 through February. The zone is $44/$40.57. Naturally, a break back above the 200-DMA that aligns with USD-weakness (CL1 to DXY 20-day correlation is -.256) would help turn the focus higher toward the $55/57 zone.

The price of Crude Oil recently traded below the 200-DMA with RSI(5) registering a bearish extreme. If the price pops higher as it did in April, August, and November of last year, the Bulls may feel as though they have dodged a bullet. However, the Crude Oil market does not have the fundamental support that other commodity sectors like base metals have, which could lead to an eventual breakdown toward the November low of $43.75/42.25.

Wednesday’s US Production data, which recently showed stockpiles at record highs will continue to stoke worries about increasing oversupply alongside a lack of buying pressure. When combining those two components alongside sentiment, it’s my preference to favor a further drop in Crude Prices or at least a further drift sideways as the forwards curve show. 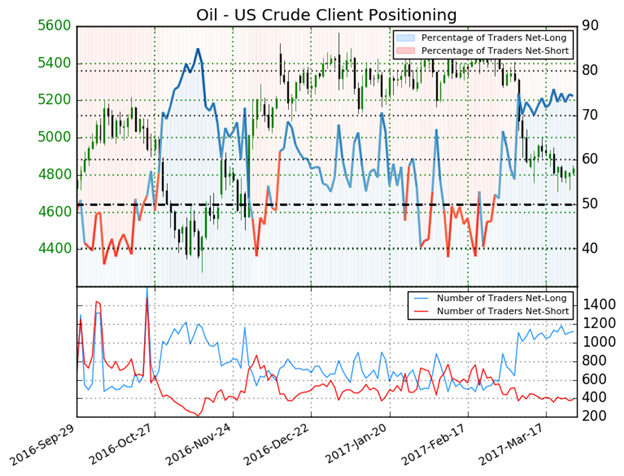 IG Crude Oil retail trader data shows 74.4% of traders are net-long with the ratio of traders long to short at 2.9 to 1. In fact, traders have remained net-long since Mar 01 when Oil - US Crude traded near 5433.1; theprice has moved 11.0% lower since then.