Crude Oil looks to be suffering from its own success. Specifically, the rising Oil price and technology gains in the sector have made shale production cheaper than ever allowing US firms to produce at lower price levels and remain profitable. However, the profitable level is believed to now be in the low $40 range, with some firms like BP aiming to be a $35/bbl firm meaning they can still operate profitably with Oil trading at $35/bbl.

The problem that many of these firms are facing can be seen in the Baker Hughes Rig Count, which pushed higher on Friday to 617. The US Rig count has been on a near straight incline since summer 2016 and shows firms eagerness to produce and squeeze out a profit as Oil price stability surfaced after multiple quarter-on-quarter price declines. However, the rising right count had aligned cleanly with the rising US stockpiles, which had recently reached levels not seen since the wildcatter days of the 1930s in the US when Oil producers were sprouting up like weeds to turn a fortune despite the recession. They took the price of a barrel of Oil down to $0.01 due to their overproduction causing many to leave the business and sell their mineral rights, and a similar fate (except the $0.01 per barrel) could re-emerge if the drilling and supply stockpiles continue to grow without a match in demand.

CRUDE OIL TECHNICAL ANALYSIS – Crude Oil has found itself in familiar territory with stretched momentum. The price of Crude Oil recently traded below the 200-DMA with RSI(5) registering a bearish extreme. If the price pops higher as it did in April, August, and November of last year, the Bulls may feel as though they’ve dodged a bullet. However, the Crude Oil market doesn’t have the fundamental support that other commodity sectors like base metals have, which could lead to an eventual breakdown toward the November low of $43.75/42.25.

While such a breakdown would hurt, price holding above the November low could indicate a longer-term consolidation lasting much of the year. Either an immediate move back above the 200-DMA or hold of the November low would keep a neutral market still anticipating an eventual move back toward the upper $50/bbl region.

A breakdown below the November low would complement the Bull’s fear of a longer-term topping pattern before a new attempt at $low-30 or 20/bbl, though I do not take that view until we break the November low. 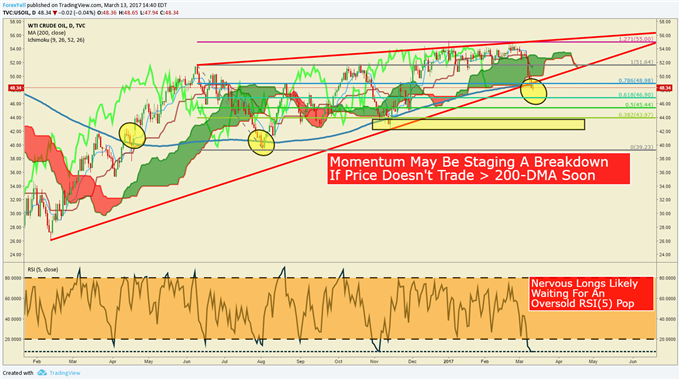