The price of Crude Oil (CFD: USOil) appears to have found support at a crucial zone we’ve long focused on as a few fundamental and Intermarket points lend a hand to Crude Oil Bulls. The zone we’ve been watching is the price range of June 9 that extends from 50.35-51.72/bbl. The reason that this zone has found significance is that it comprises the daily range of an extreme day that has since acted as critical resistance and has recently been tested as support.

A key tenet of Technical Analysis that looks for observed behavioral changes from traders is when old resistance becomes new support. Such a zone is known as a polarity point and is shows a transition of a market view from a view of, ‘it’s not worth bidding through that level,’ to, ‘it’s not worth letting it fall below that same level.’

In our recent pieces, we’ve focused on a developing wedge pattern from the November low that was part of a ~30% move higher in Oil over nearly twomonths of trading. From a technical viewpoint, Oil has given us a clear zone of support and resistance, which will be helpful for building a bias going forward. Regarding support, we can use the polarity zone that is highlighted on the chart below and explained above. Regardingresistance, we can utilize the top of the Evening Star reversal pattern with resistance at $54.29.

The rising wedge pattern, which in the market context could either be an ending diagonal, which would favor an aggressive break below $50 followed by further downside or a leading diagonal would be favored as leading if we got a daily close above $54.29. A leading diagonal would be the most Bullish outcome for Oil if played out in a traditional manner where a small retracement against the direction of the diagonal is preceded by an aggressive move higher.

The recent weakness in the US Dollar that we’ve also been discussing and the fundamental backing from Saudi Arabia could also align with higher Oil prices in the near term. 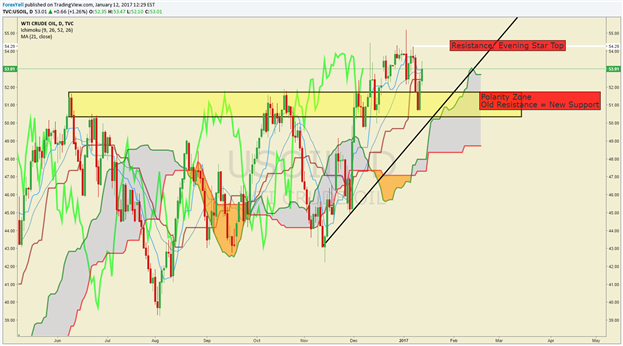