Many thought OPEC was cutting production to raise the price of Oil. However, a recent Reuters report may be showing there was more to the decision to cut production, which could support the Bullish argument even further. While the supply imbalance (supposedly too little demand given supply coming from various producers) was the popular notion as to the reason for the cut, reports are now surfacing that prior production levels may have been testing capacity limits, and we’re not sustainable.

Looking at the OPEC cut from another angle, we may have been working with a WTI average H2 price in the upper half of $40/bbl while the world’s largest producers were pressing capacity limits. Naturally, the last two and a half years with a ~$84/bbl price range that included a ~78% drop from July 2014-February 2016 showed us that there is room for volatility. However, it’s fair to think that an average price in the upper half of $40/bbl may be long-term support, and if the chart’s hold up, we could be working on further upside from these levels in 2017.

Additionally, Russian Energy Minister Novak made clear on Friday that all oil firms were to cut output under the OPEC deal, adding market-wide belief that the deal will hold and the perceived market imbalances will balance soon. Another component worth watching is a possible pullback in the USD on an over-extension in the aftermath of the FOMC where more rate hikes were projected in 2017 that was revealed at the September FOMC meeting. Any subsequent USD weakness could also support the price of Crude Oil, which is denominated in USD.

We had recently noted how there had been an increase in demand for WTI call options with the most active being the 2018 December $80 Brent Crude calls. While not predictive, this flurry of options action helps to show that there are institutions working to positions themselves to capture further upside should it develop in WTI. 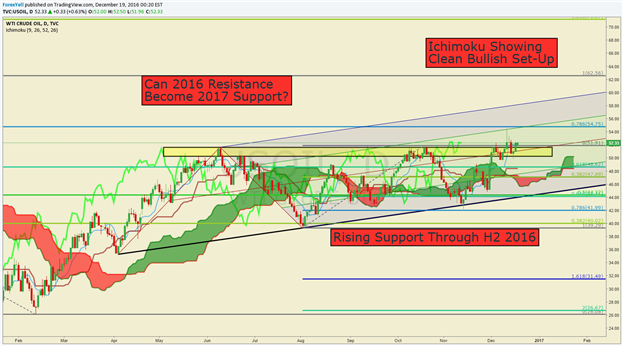 The support that we had been focusing on throughout the 2016 rebound and into 2017 was the rising trendline (black on the chart above) drawn from the first higher low off the rebound from the February low. While price is pulling away from that support zone, it’s fair to assume we could continue to hold above the trendline and the Ichimoku Cloud as a separation is attempting to grow from the key resistance zone in H2 2016 from the June 9 range of $50.26/51.64.

The recent break into 17-month highs shows that many short positions continue to be cleared out of the market. The clearing of shorts combined with the increased open interest in LT Bullish Options could soon bleed into the spot positions market. Per the Daily Sentiment Index as of Friday’s close, the Crude market is composed of 65% Bulls, which remains well short of the 85% extreme Bullish sentiment reading that could mean there is a good deal more room to run in the market as 2017 gets underway.

The CFTC’s Commitment of Trader’s report also showed that short trades had fallen by nearly a third, and currently sits at the lowest levels since May. While the substantial cut in production is exciting, there is also little resistance for the Bull run higher into 2017. A lot of the short exposure has come from bearish hedges from producers as a risk management tool in the treasury department of a firm as opposed to shorts looking for a resumed downtrend.

The chart above shows a Modified-Schiff Pitchfork that has done a fine job of framing price action. Recent price action in mid-December has found support at the median line within a Bullish Slope as well as the prior resistance that may turn into new support. Should the price continue to hold above this level, we’ll favor a move toward the top of the channel near $54.75/bbl (also the 78.6% Fibonacci Retracement of the 2015-2016 price range) that would be followed by the top of the channel near $58/bbl.

Should a reversal develop in the price of Crude Oil, we’d be on the watch for the price to break down through the rising support that lies between $47/45. Only a break below this zone would take us from Bullish to Neutral. Until then, we’ll favor eventual upside heading into 2017.