In a rather surprising move, OPEC went ahead with the Oil Production cut that they agreed to in Algiers in October. The cut has taken Oil to the highest levels since June 2015. The surprise mainly came from the apparent tension leading up to the agreement, but now that the Accord has been put in place, which will take effect on January 1st, the good news continues to flow. The specific good news in focus at the beginning of December is the potential for Non-OPEC players like Russia to join the production cut.

Looking at the technical picture with Oil’s recent strength, we have seen a turn lower in the US Dollar that could continue to be a key factor in Oil’s strength. 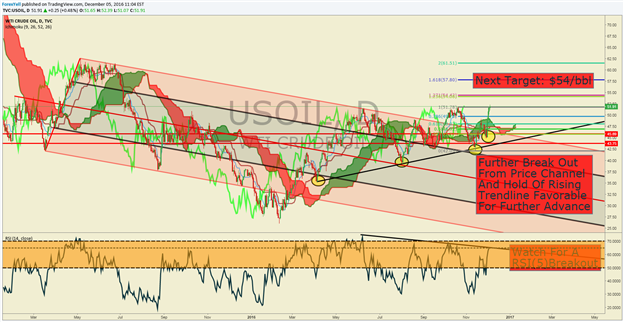 The support that we had been focusing on throughout the 2016 rebound was the rising trendline (black on the chart above) drawn from the first higher low. We were looking for a break below this on a possibly failed OPEC deal to be a confirmation that a double-top was in play. We now see the opposite was in the works where the trendline holding preceded new 16-month highs.

We noted from recent Commitment of Traders data was that we saw that long Brent exposure increased by its most in 7-weeks last week by Hedge Funds before the cut was announced. However, per Bloomberg and CFTC data, Hedge Fund managers cut their long-exposure by ~5% ahead of the cut, which may mean that a lot of the post-cut rally were those managers that missed the initial surge jumping back in.

A breakout in price may also be achieved if we see the RSI (5) on the lower portion of the chart above breakout above the trendline drawn since the summer momentum peak.

Another component that could help the price of Oil stay in breakout mode is the pull-back in the Dollar Index that we’ve seen in early month flows after the Italian Referendum.

While the 18-week technical picture is messy, further upside targets are aided by Fibonacci analysis over recent price ranges. When looking at the May 2015-February 2016 range as well as Fibonacci Expansions over the recent October-November range, we see a confluence of upside targets near $54/bbl in WTI (CFD: USOil).

Another sign that we’ve been on the watch out for is the definitive pull-away from the top of the Andrew’s Pitchfork. As price continues to pull away from the Pitchfork and trade above the Ichimoku Cloud, the burden of proof will fall on the bears to prove their case as the Bulls look to be trading in the path of least resistance.