The Oil market has a lot to digest, and it may have reasons to be Bullish as Donald Trump was elected to the 45th U.S. President over Hillary Clinton. In short, the free-trade that made Oil abundant and aggressively supplied may face some friction as we begin to get a glimpse of the likely pivot from clean-energy policies toward a revival of U.S. Fossil Fuels to revive job growth. Therefore, we might not have enough impetus to turn bearish on Crude Oil.

Given the surprise of the U.S. Presidential Election, it will be important to watch if there is a change of tone in OPEC negotiations. Recently, we’ve seen OPEC talks break down as many producers seek exemptions from the production cut. However, in anticipation of Trade Deals getting redrawn under President Trump, it’s possible that OPEC producers are now more encouraged to take less absolute revenue in hopes of becoming more powerful together.

Wednesday’s EIA report showed the Crude Oil inventories rose by 2.4m bbl last week, which was the largest 2-week gain in DoE crude inventories since Q1 2015. The report seemed to do little to price given many are looking beyond and toward how new policies will affect supply and demand.

On the Monday Macro webinar (free attendance with registration,) we discussed a few positive developments that were arising from Russia that could signal they’re willing to help support Oil prices by joining in on the OPEC production cut. Russia’s government-owned Oil company, Rosneft, has decided to sell a stake of equity valued at ~$11B that may help offset the drop in revenue from lower oil prices as well as cutting production under the new accord that is expected to be either approved or formally rejected in Vienna on November 30. 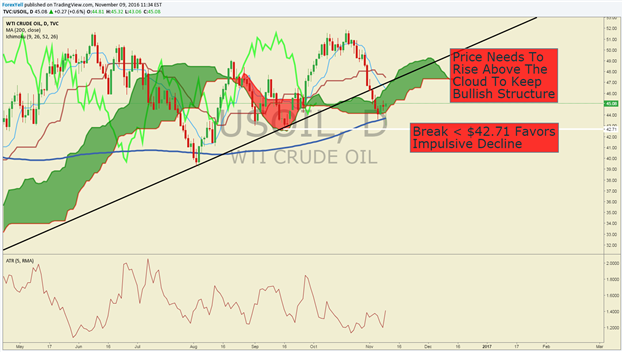 The chart above displays the ~15% drop in Crude as doubts grew about whether or not OPEC would reach an agreement to cut production. The move lower has taken us toward the base of the Ichimoku Cloud and the 200-DMA. It remains difficult to be bearish above both of these indicators that sit near $44.15/44.37 per bbl.

As long as price remains above the 200-DMA and the Cloud, we’ll hold off discussions of a double top at $51/bbl. One technical development worth watch is what appears like a three-wave move higher that was initially anticipated to be a strong move higher could be a corrective move higher. If there has been a definitive corrective move higher, we will anticipate an impulsive decline, which could take us aggressively lower toward the August low of $39/bbl and possibly a good deal lower. However, an inability to break below support mentioned above would show there is not enough downside pressure to hit these bearish levels.

A specific level on the chart worth watching that is below the 200-DMA is $42/71, which was the September low. A break below this level in addition to the 200-DMA and Ichimoku Cloud would favor an impulsive decline against the corrective move higher that would also bring into discussion the double top downside targets.

One component that had not shown up as the price of Oil trades at the 200-DMA is a strong US Dollar. After the election of Donald Trump, we should be on the watch for continued Dollar strength that tends to align with Oil weakness like we say in H2 2014. While the recent bearish move in Oil has been on reliant on the breakdown in OPEC negotiations, a resumption of USD strength that we saw in late October could keep price pressured near the 200-DMA until more clarity is gained.