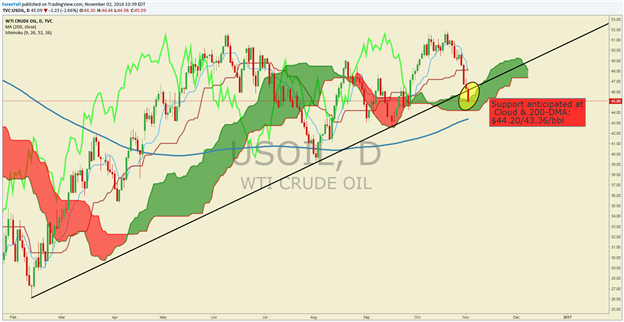 The fundamental data surrounding the price of Crude Oil continues to put doubt in the upward direction of Crude Oil. On Wednesday, the EIA Crude data confirmed what many traders had feared. Namely, the rise in the price of Oil would cause the production from active rigs in still-profitable shale regions to aggressively turn on the spigots to help service liabilities. The expectation ahead of the 10:30 am ET release was ~2M Barrels, and API data had forecasted ~9M barrels. Therefore, the 14M build in U.S. inventories caused a sharp sell-off in Oil taking the price lower by nearly 3.5% after the report.

After the data released and the continuation of the market beginning to price in the failure of an OPEC deal to cut production is feeling like a crash after trading at 15-month highs. We shared yesterday how the relative number of bulls as seen in the recent CoT report that shows the difference between net speculative positioning and net commercial positioning measured is at 98% of the 52-week percentile, and US Dollar is at 100% of the 52-week percentile. This relative extreme doesn’t imply a top but can be indicative that there could be a significant unwind if disappointing data emerges such as a failed OPEC deal.

As the picture comes together, you can see the reasons for the sell-off in Crude Oil. Despite the soft promise from OPEC to making progress to an accord, nearly everyone in OPEC is increasing production while Rosneft, the oil company owned by the Government of Russia, is bragging about excess capacity and U.S inventory rises by the largest amount on record. There is the bright side of U.S. & China demand, but the supply glut issue remains as prevalent as ever.

Crude Oil has retraced below the 61.8% of its rally from mid-September that started at $42.72/bbl and went as high as $51.92/bbl in mid-October into the Ichimoku Cloud. The next, and some would argue last-Fibonacci worth watching is the 78.6% retracement that sits at $41.71/bbl. Now that we’ve broken below the Trendline shown above, it’s fair to think we could see a further unwind of the relative extreme on a 52-week basis in the CoT differential index.

Because the price has broken below this zone of support that is comprised of the Trendline drawn from February and now sits in the Ichimoku cloud, we will likely see a much deeper correction as confidence is broken. The next downside levels to watch are the 78.6% retracement followed by the base of the Ichimoku cloud at $44.13/bbl, and lastly the September low at $42.72/bbl. Due to the stretched relative positioning, as explained in the CoT note, we could see a further breakdown of these technical support points that may provide a wave of selling pressure that drops price closer to $40/bbl.

Given the ~13% drop in ten days, a bounce is expected now that we’re trading within the Ichimoku Cloud. However, another break below the Cloud could, in fact, have this move pinned from August to October as a double top pattern, which would be validated on a close below $39.15%.

The resistance level that we’ll be watching from here is the current November opening range high at $47.34/bbl followed by $49/bbl. Until the break of resistance surfaces, we’ll be anticipating any move higher to unfold in three waves in a corrective fashion that resumes lower. The burden of proof is now on the Bulls, and we’ll continue to doubt their arguments if the price of Oil to fails surpass $47.34-49/bbl before anticipating new 15-month highs anytime soon.

Key Levels Over the Next 48-hrs of Trading As of Wednesday, November 2,2016