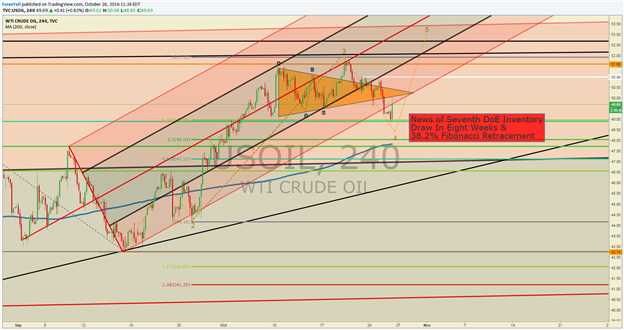 Oil prices are attempting to halt their third day of declines after the EIA U.S. oil inventories showed the seventh weekly draw of inventories in eight weeks. Aggregate inventory in the U.S. declined in the U.S. by 553k bbl, against median estimates of a ~2M bbl build.

Ironically, the inventory decline could continue to make negotiations difficult surrounding the OPEC agreement and Russia to come together to cut production to support oil prices. The irony comes from the price of Oil is sitting near $50 based on the hope of a deal to cut production, while nearly 2-months of inventory draws in the U.S. could keep members from committing to action, so they do not miss out on the rise in demand and price with fixed output limits.

Our recent note shared that Russia is not ready to commit to a cut and that Iraq is seeking an exemption from the OPEC deal expected to be finalized or nullified on November 30 in Vienna. If the request for exemptions mount, Saudi Arabia will likely either need to reduce the amount of the cut or step up and cut more production themselves, which would cause them to take a larger absolute drop given their production capacity, but like a similar relative cut to other members.

The chart above shows the price of Crude Oil breaking bellow a bullish channel that had contained the price of Oil for most of October. The recent move also takes us below relative support of the price triangle, which helps us see that the move higher starting in late-October. The price action this week has also brought Crude Oil below the 21-DMA at $49.80/bbl, a clear directional bias indicator.

The price low on Wednesday (so far) on the move down from the 15-month high at $51.91 on October 19 was the 38.2% of the higher low in late September to the October 19 high at $48.95. Should this support hold, and an impulsive bullish move develop, we would await a price break above $51/bbl to turn from neutral to bullish. However, now that we’ve broken below the prior support of the triangle and the 21-DMA, if the price remains below $51/bbl, we could be working towards the 50% & 61.8% Fibonacci retracement of the September 27 to October 19 price range at $48.04 & $47.12/bbl respectively. Either the break above $51/bbl or a move down to ~$47/bbl that begins rising aggressively to believe that an Elliott Wave ‘5’ is beginning that could take into the mid-$50/bbl range.

Given the potential for further downside, we’ll continue to put the burden of Bullish proof of Oil to surpass $51/bbl before anticipating new 15-month highs anytime soon.