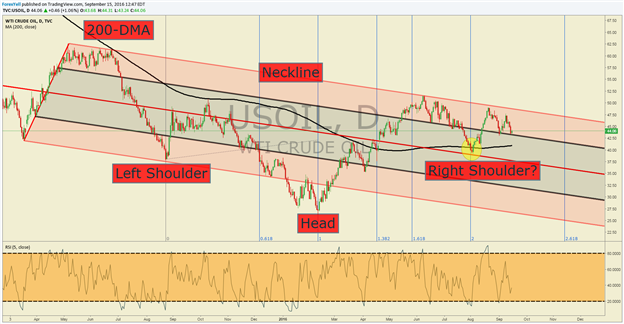 A likely rise in Oil exports and the continued rise in global supply relative to demand has continued to grip the world’s focus and put pressure on the price of Oil down toward the September low of $43.02/bbl. Recent stories on stories of Libya and Nigeria restoring production are further putting attention on the September 27 Algiers OPEC Meeting.

If Algiers passes without an agreement to cap production from Saudi Arabia, now the world’s largest exporter again then oversupply will continue to be a worry that could keep the price of Oil below $50/bbl.

One upside into balancing global supply and demand imbalance appears to be China’s plans to build their strategic oil reserves, but there is a likelihood that this will not be enough to support the Oil market if the US Dollar continues to trade higher or if OPEC is unable to reach a production-cap agreement in Algiers.

The chart above is simple has competing stories. First, the head and shoulders is a classic bullish price pattern that fails to play out as often as newer traders would hope. However, it’s unwise to show that after an extreme low in February, the market has recovered aggressively and is now sitting close to long-term price channel resistance and sitting above the 200-DMA at $40.91/bbl.

Given the recent US Dollar strength, which is emerging against commodity FX like the Canadian Dollar and Emerging Market currencies like the Mexican Peso we could continue to see a move toward the 200-DMA. A supportive component of US Dollar strength appears to be USD Funding costs on the international interbank stage that are shown with 3M USD LIBOR currently at 7-year highs. 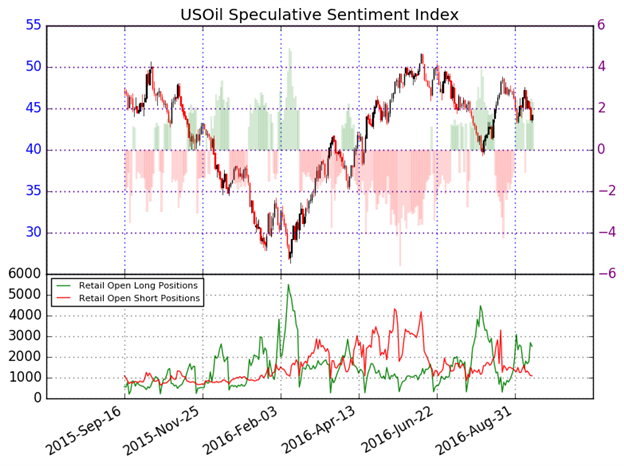 We use our SSI as a contrarian indicator to price action, and the fact that the majority of traders are long gives a signal that the USOil may continue lower. The trading crowd has grown further net-long from yesterday but unchanged since last week. The combination of current sentiment and recent changes gives a further bearish trading bias.