Regardless of the story that is building below the surface, if the market respects resistance so should you. The chart that we’ve shared with you (more on that below) has persistently shown an inability of the market to trade at a higher high above $50/bbl. Should such a development take place, then the outlook would change to a Bullish outlook. Until then, it has paid to sell rips.

One key component of Oil’s weakness is demand and US dollar. When the US Dollar weakens, and stories abound that demand relative to supply is picking up, the market ticks up as well. However, when the US Dollar, which is the currency Oil is priced in, strengthens and the stories start to turn to oversupply relative to demand Oil tends to turn lower.

Over the last 24-hours, we’ve heard from the IEA that the Surplus glut that has been aided by fracking technology in the US and aggressive supply in struggling OPEC economies like Saudi Arabia may be around longer than originally anticipated. The IEA forecast aligns with another announcement by the IEA that Saudi Arabia has overtaken the U.S. as the world’s largest producer.

After the IEA’s comments that Oil’s oversupply on a global scale may persist well into 2017, traders will turn their attention to the API & DOE inventory data as well as risk sentiment. If risk-off returns alongside increasing supply that would validate the IEA forecast, we could soon see a return to support at the 200-DMA.

The chart above is simple, and very telling at the same time. There are three indicators on this chart of a 200-Day Moving Average as well as a Bullish & Bearish Andrew’s Pitchfork. For now, the key drivers appear to be the Bearish (Red) Andrew’s Pitchfork where resistance sits at ~$49/bbl and the 200-DMA at $40.84/bbl.

Given the recent US Dollar strength, which is emerging vs. commodity FX like the Canadian Dollar and Emerging Market currencies like the Mexican Peso we could continue to see a move toward the 200-DMA. 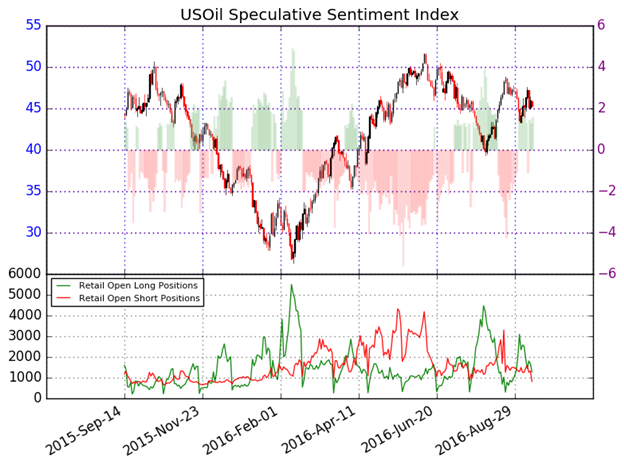 We use our SSI as a contrarian indicator to price action, and the fact that the majority of traders are short gives a signal that the USOil may continue higher. The trading crowd has grown less net-short from yesterday but unchanged since last week. The combination of current sentiment and recent changes gives a further mixed trading bias.