Wednesday’s EIA numbers showed a ~3.5Mln barrel surprisefor Crude Oil Bulls. The expectation of US Crude Oil Inventories was for a build of ~+950k, and the actual print was a draw of ~2,500k barrels. As encouraging as the headline print was, the stellar commodity has two key headwinds that must be faced before moving on and potentially cementing the uptrend into the meat of H2 2016.

The two headwinds are Saudi’s Oil Production and the US Dollar. Regarding Saudi Arabia, who recently discussed prospects of a production freeze now that Iran has pushed production to previously stated goals there is now discussion of a production boost.

Naturally, as demand has moved higher, the talks of a production freeze was unequivocally Bullish. However, a note on Wednesday morning before the EIA numbers noted that Saudi might boost Crude output in August to ~10.8-10.9 MLD BPD, which would hit a new record.

Since Saudi is already the world’s largest oil exporter, it would make the discussion and the potential outcome more meaningful as to whether a coordinated production freeze is agreed upon. Should one fail to materialize, we could see a strong increase in production from Saudi, Russian, and Iran that would likely flood the market. One positive sign toward an agreement came from former OPEC President Chakib Khelil who noted that near-top production levels have been obtained by many OPEC and non-OPEC members and that many have likely grabbed all the market share available to them.

Secondly, the US Dollar has seen a bit of a revival following comments from NY Federal Reserve President William Dudley. On Tuesday morning in a Fox Business interview, Dudley warned that the market was likely under-pricing the probability of a rate hike in the near-future, which caused the USD-weakness to correct itself. The US Dollar is inversely correlated to the price of WTI Crude Oil so further strength could put pressure on the commodity bloc.

The chart above has done a fine job of framing price action in WTI Crude Oil. After failing at the topchannel in June, the price quickly dropped down to a pre-identified zone provided by the median line and the Fibonacci Retracement levels in focus between $41.85-$35.22/bbl. As you can see now, we’ve bounced through an internal trendline right back up to formidable resistance that is provided by the Channel Top and the Ichimoku Cloud.

Given the ~17 Months within the price channel (aside from the January/February breakdown,) it’s safer to favor price remaining as opposed to breaking out given the low-volatility environment we find ourselves. A stronger US Dollar or increased Saudi production could be catalysts to keep the price of WTI Crude Oil under pressure.

Key support that would deflate the confidence of the August trend would be a break below the higher-low of $41.27/bbl. A breakdown below there could be the first confident sign that price will continue to wallow lower in the falling channel drawn on the chart.

However, should a weaker US Dollar materialize from the July FOMC Minutes or a Production Freeze come to an accord, a breakout should not be takenlightly. Last note, we discussed that Hedge funds had taken a Bullish stance on WTI per futures positioning according to the CFTC. The shift to long positions by institutional money managers increased to their highest amount since January right before the last strong move higher from the high-$20/bbl zone to the low $50/bbl.

The recent price action in Crude Oil has been impressive. The 5%+ rise in the price of Oil last week was the largest move in three months and was supported by Wednesday IEA inventory data.

The recent talk of increased supply from Saudi is worrisome, and if it came to fruition alongside a stronger US Dollar, the resistance of ~$47-$49/bbl would likely hold. However, if we’re able to break this formidable resistance, we could be working on a potential retest and break of the June high of $51.64/bbl. 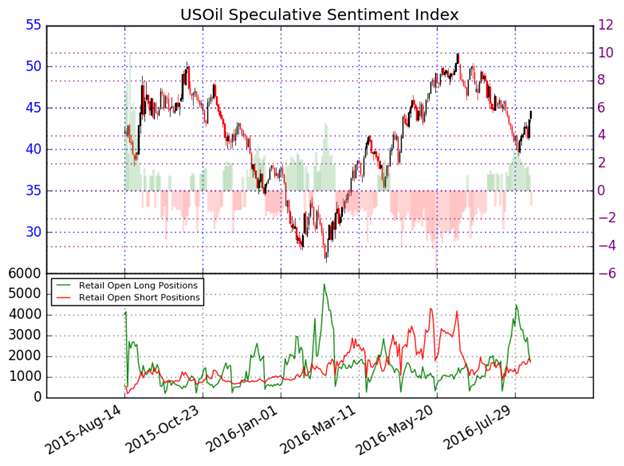 In addition to the technical focus, we should keep an eye on retail sentiment. The upsideis beginning to align with our Speculative Sentiment Index or SSI for now.

We use our SSI as a contrarian indicator to price action, and the fact that the majority of traders are short gives asignal that the USOil may continue higher. The trading crowd has flipped from net-long to net-short from yesterday and last week. The combination of current sentiment and recent changes gives a further bullish trading bias.