The intraday move in Crude Oil of a 5%+ gain was one of the most impressive moves in August and aligns with the risk-on view shown in equities and commodity FX. Saudi Arabia’s Oil Minister noted that there might be discussions next month in Algiers to support prices.

Thursday’s intraday high was the highest level since July 25. While demand is very hard to forecast, and there are few forecasts of growth in emerging or developed markets demand there appears to be a boost from refiners. The IEA believes that refiners will process record volumes of crude in Q3 that could increase 600,000 barrels a day from a year earlier. According to the IEA, this increased demand from the IEA should reduce the ‘overhang,’ in the market.

One other word of warning from the IEA was the risk to U.S. Producers if the price of Oil stays below $60/bbl. We have seen a rise in active US Oil Rigs per the Baker Hughes could, however, the current number is a bit less than 75% production from over a year ago, and it will take a price tag closer to ~%60 to see pop in US Activity, which would help the balance sheets of US Energy firms.

The Channel going back to early 2014 on the chart above has done an extremely fine job of framing price action in WTI Crude Oil. After failing at the top channel in June, the price quickly dropped down to a pre-identified zone for a bounce between $41.85-$35.22/bbl. However, you can see now that we’re coming into an internal trend-line that may provide resistance.

If the price of WTI Crude Oil closes above $43.36/bbl on Thursday, the daily candle will have formed a Bullish Key Reversal where the day’s low broke yesterday’s low, but the close was higher than yesterday’s high. Such developments tend to have followed through, and we could see a follow through up to the 55-DMA (not pictured) all the way up ~$46.20.

Given the light volume of mid-August, it’s often folly to fight quick moves even though true breakouts have less participation.

Today’s price action in Crude Oil was impressive. The 5% Rise in the price of Oil that was the largest move in three months naturally aligns with the risk-on narrative of breakouts in equities and a rather sanguine US Dollar.

The Rebalancing effort continues, but the IEA seems to note that demand will begin to come in line as US production will have a hard time keeping up with the massive OPEC production. Regardless of the increases in production in Iran, the record production in Saudi and Russia, a move higher could sustain if the massive short position from hedge-funds is unwound. 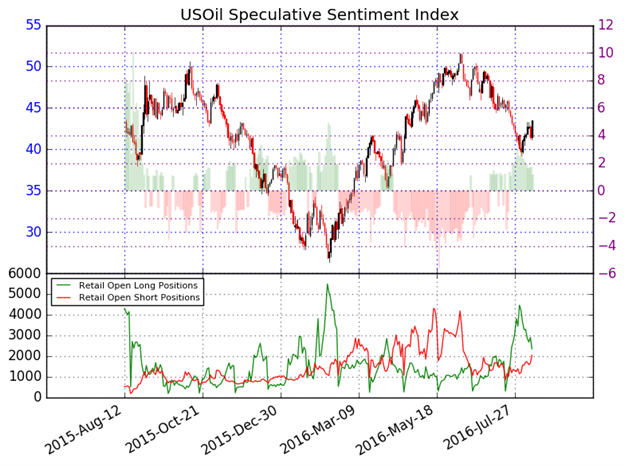 In addition to the technical focus, we should keep an eye on retail sentiment. Upside is now aligned with our Speculative Sentiment Index or SSI for now.

We use our SSI as a contrarian indicator to price action, and the fact that the majority of traders are long gives signal that the USOil may continue lower. The trading crowd has grown less net-long from yesterday and last week. The combination of current sentiment and recent changes gives a further mixed trading bias.