The price of WTI Crude Oil (CFD: USOil) has continued to stabilize on Monday, despite Friday’s Commitment of Traders report showing hedge funds have their largest bearish exposure on record. Hedge Funds have built up an aggressive short position on Oil, which last week touched Bear Market territory from the June high with both Futures and Options positions.

OPEC doesn’t appear too worried by the recent Bear Market, as they are set to have informal talks in Algiers in September. Mohammed Al Sada, Qatar’s energy minister, and current OPEC President recently spoke confidence in the resilience of the price of Oil with this statement on the OPEC website, “Expectation of higher crude oil demand in the third and fourth quarters of 2016, coupled with decrease in availability, is leading the analysts to conclude that the current bear market is only temporary, and oil price would increase during later part of 2016.”

The natural worry, for now, is that many membernations of OPEC are unable to balance their budget with Crude Oil near $40/bbl. Such low prices mean if Oil remains lower for longer, we could continue to hear whispers of a coordinated production freeze, which historically has been a hollow promise and would likely be now given that Russian is producing at near record levels and floating Oil Supply is near all-time highs.

In addition to the concerns of OPEC and other Oil-dependent countries, traders should be on the watch for a stronger Dollar in addition to the return of a supply glut. For now, it seems difficult to draw a credible picture where the oversupply is consumedto bring the market into equilibrium.

The price of WTI Crude Oil is pushing up against resistance to open the week. Just above the bearish channel (red), you’ll notice the Weekly Pivots and the 38.2% Fibonacci Retracement of the June-August range that sits at $43.85/bbl. Therefore, for now, the Bearish view will be favored on the price sustaining below the ~$44/bbl zone.

Should we see a stronger US Dollar or a simple trend continuation lower in US Oil, we would naturally target last week’s low at $39.17/bbl. We’ve long been a fan of the 38.2%-61.8% Fibonacci Retracement Zone of the February-June Range that encompasses $41.85-$35.81/bbl for a potential turnaround in the price of Oil. To be fair, we have met that requirement so a move above $44/bbl could be an early indicator that the worst is over for now.

On the other hand, a break back below the 200-DMA ($40.37) would have us watching for a test and possible break of the lower end of the Fibonacci Retracement zone at $35.81. Such a move would likely align with a stronger US Dollar or further data on the oversupply of Oil with little demand to match.

The question has now become whether or not we’re on the verge of a new break-down in Oil. Since price momentarily reached Bear Market status last week, it’s worth noting OPEC countries and companies who were benefiting from the rise in

Oil prices are feeling the squeeze like in the same manner of 2014-early 2016.

Contrarian System Warns of Further Downside As of 8/05/16 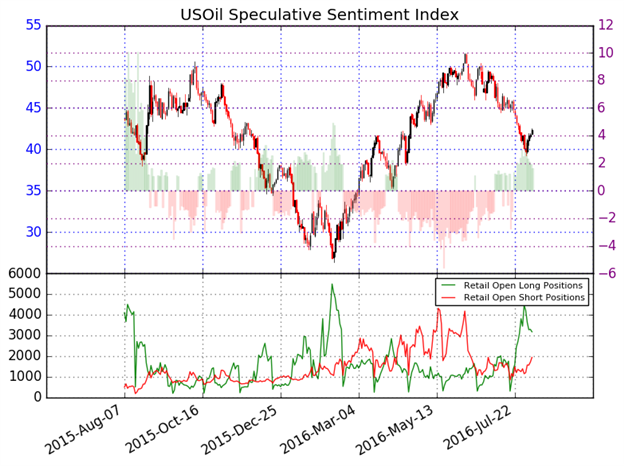 In addition to the technical focus around multiple support-zones, we should keep an eye on retail sentiment. Further downside is aligned with our Speculative Sentiment Index or SSI for now.

We use our SSI as a contrarian indicator to price action, and the fact that the majority of traders are long gives asignal that the USOil may continue lower. The trading crowd has grown less net-long from yesterday and last week. The combination of current sentiment and recent changes gives a further mixed trading bias.