The price of WTI Crude Oil (CFD: USOil) began to stabilize toward the end of August’s first week. However, stabilization typically is a consolidation before a continuation of trends as opposed to a buying opportunity for bargain hunters.

On Friday afternoon, we found out from Baker Hughes Inc. that the rig count has risen for the sixth straight week, which has aligned with OPEC nations denying any talks regarding a planned Freeze. Those developments, alongside a very strong Non-Farm Payroll, helped limit the gains in Oil after a brief two-day rally on the back of a resumption of Dollar Strength.

For now, it appears the two worst foes for Oil Bulls would be, a stronger Dollar and return to a supply glut. For this reason, we have encouraged you to keep an eye on increasing supply in H2 2016, and whether or not supply will be met with sufficient demand. For now, it seems difficult to draw a credible picture where the oversupply is consumed to bring the market into equilibrium.

There are a lot of things that should catch your attention on the chart, but none more than the 200-DMA (White Horizontal Line.) The 200-DMA currently at $40.38/bbl has been a clear indicator of Oil strength or weakness going back to 2014. With Monday’s break of the price of Oil below the 200-DMA, few things are going right for Crude Oil Bulls when looking at the price chart. The end of August’s first week did see a short jump back above the 200-DMA, but any continuation move lower should be taken seriously.

You’ll notice on the chart above; I have added an extension to the Andrew’s Pitchfork (Blue) Price Channel. In short, the inability of price to sustain above these extended levels can indicate a complete behavior shift in the price of Oil. Such a move below the 100% extension would favor much more downside.

The question has now become whether or not we’re on the verge of a new break-down in Oil. Since price momentarily reached Bear Market status this week, it’s worth noting that funds used to keep rigs going are likely drying up.

Now, if we, in fact, see a resumption of Dollar strength, we would favor downside acceleration in the price of Crude Oil. For now, the big risk appears to be a resumption of US Dollar strength that would continue to pressure the price of Oil down through the 50%-61.8% retracement zone of the February-June rally. Lastly, a painful thing to watch would be if more rigs start to be forced off the market. A Bloomberg note stated that the recent Bear Market dip in Oil had increased the Oil Majors’ debt burden to double to ~$140M.

As the old saying goes, the cure for low prices is low prices. However, this medicine likely will not go down smooth if we see oil firms forced out of the market that would in turn help balance supply.

Contrarian System Warns of Further Downside As of 8/01/16 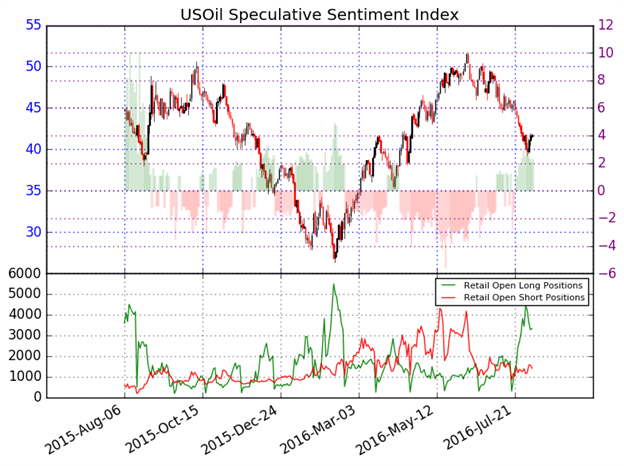 In addition to the technical focus around multiple support-zones, we should keep an eye on retail sentiment. Further downside is aligned with our Speculative Sentiment Index or SSI for now.

We use our SSI as a contrarian indicator to price action, and the fact that the majority of traders are long gives a signal that the USOil may continue lower. The trading crowd has grown further net-long from yesterday but moderated since last week. The combination of current sentiment and recent changes gives a further mixed trading bias.