The price of WTI Crude Oil (CFD: USOil) traded at one-week lows on Tuesdays as markets return to “normal” after an extended weekend due to a US Holiday. The shortened week will look to key data points toward the Thursday and Friday such as the DOE Inventory data and Non-Farm Payrolls to see if demand is likely to increase or fall.

Last week’s inventory data continued the trend over the last 6-weeks of draws on the stock of U.S. Crude Oil Inventory. Last Wednesday’s data print showed an extreme beat of the inventory data with an expectation of -2220k that saw an actual inventory draw surpassed (read: demand) of -4053k.

Now, all eyes appear to be appropriately on the US Dollar. The US Dollar traded higher on Tuesday as a benefactor of haven capital flows that sent the German 10-yr Bund to record lows of -0.172% alongside the US 10-Yr Treasury that traded with a record-low yield of 1.36%. In no uncertain terms, investor’s doubts about deflation and weak growth remain a headwind for Oil to continue the impressive rally we saw off the mid-February low. If the US Dollar picks up steam and begins to test the January high, we would expect to see Oil to trade lower.

To explain how much lower, let’s move on to the charts.

As US Dollar Has Support, Watch Polarity Level on USOil At ~$45/bbl

We’ve long been a fan of the 55-Day Moving Average as a rudder on medium term Crude Oil sentiment. Currently, Oil is trading below the 55-DMA at $46.86/bbl. The Fibonacci Sequence Based Moving Average has held as safe support for nearly four months now. A significant break lower would change a Bullish Market to neutral in the near-term.

As of Tuesday, the price of USOil is approaching a key lower high at $50.51/bbl. If we break above this point of resistance, we will likely be aiming towards new 11-month highs that currently sits at $51.64/bbl.

In addition to the current June high of $51.64/bbl, there was a lot of resistance in the $51/bbl region such as the 100% Fibonacci extension move off the February low and the October 2015 higher.

Therefore, to see a pullback is not surprising. Furthermore, if we break above the ~$51 resistance level, a stronger break toward the next key resistance level ~$60 could be underway.

A break below the $45/bbl level, which has acted as recent support, would open up the scenario of further weakness toward the 38.2%-61.8% retracement zone of the February-June rally. This zone is around $41.85-$35.81/bbl. US Dollar strength would hasten such a move.

Contrarian System Warns of Further Downside As of 7/5/16 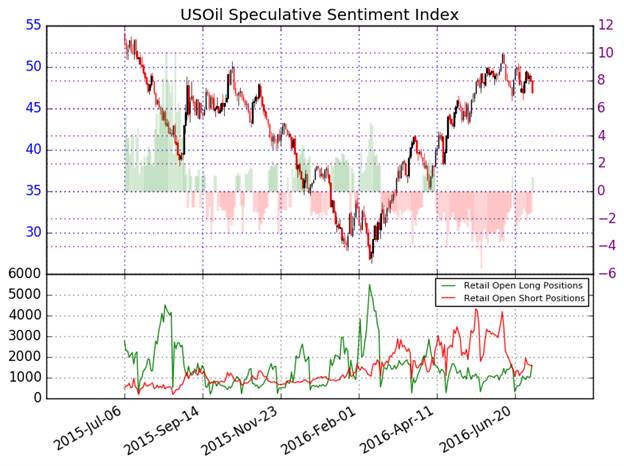 In addition to the technical focus around multiple support-zones, we should keep an eye on retail sentiment, which favors more downside price action. Further upside is currently aligned with our Speculative Sentiment Index or SSI for now.

Open interest is 18.5% higher than yesterday and 1.9% above its monthly average. We use our SSI as a contrarian indicator to price action, and the fact that the majority of traders are long gives a signal that the USOil may continue lower. The trading crowd has flipped from net-short to net-long from yesterday and last week. The combination of current sentiment and recent changes gives a further bearish trading bias.