That narrative has changed and by a good amount.

Today, we’ve seen multiple EIA reports that have shown very large draws of US Oil Inventories and notable depletion of the stock in Cushing, OK. For now, it seems like the few down days we have in WTI Crude Oil are short-term risk-sentiment setbacks where the Dollar rises, albeit still below the critical 12,000 level that we’ve been watching.

Another key point worth mentioning is what is happening in the options market. In short, it seems that hedge funds and large options traders still favor much more upside. In fact, of the most in-demand options related to Oil right now as per Francisco Blanch, head of commodities research at Bank of America Merrill Lynch in New York is deep out-of-the-money call options, which would only pay out over the coming years if Oil is above $100/bbl.

Some traders have been frustrated by the lack of clear “buying opportunities” in WTI Crude Oil with the rally from mid-February. In other words, we’ve seen very few strong pull-backs, but the move higher has been choppy. A choppy move higher typically plays out by new high prices printing only to soon fall back to a multi-day low.

However, another helpful support point since mid-March has been the 21-DMA.

The 21-Day Moving Average, currently at $49.03/bbl has held as loose support for nearly two months now. When a price has come down to this level, we’ve seen a strong bounce and the much-debated uptrend resume.

As of Friday, the price is giving up some of the weekly gains. However, there is still plenty (aside from a near doubling in price from February) for bulls to be encouraged. First, after an impressive EIA number on Wednesday, the price of Crude Oil pushed above the Weekly R2 Pivot, currently at $51.21/bbl. Even with the pullback to the mid-$49 level, the price of WTI Crude Oil is still above the weekly pivot point ($48.86/bbl).

Thursday’s high of $51.64, which is above the Weekly R2 Pivot will remain the resistance in focus for now. However, there was a lot of resistance in the $51/bbl region such as the 100% Fibonacci extension move off the February low and the October 2015 higher. Therefore, to see a pullback is not surprising. Furthermore, if we break above the ~$51 resistance level, a stronger break toward the next key resistance level ~$60 could be underway.

Contrarian System Warns of Further Upside As of 6/10/16 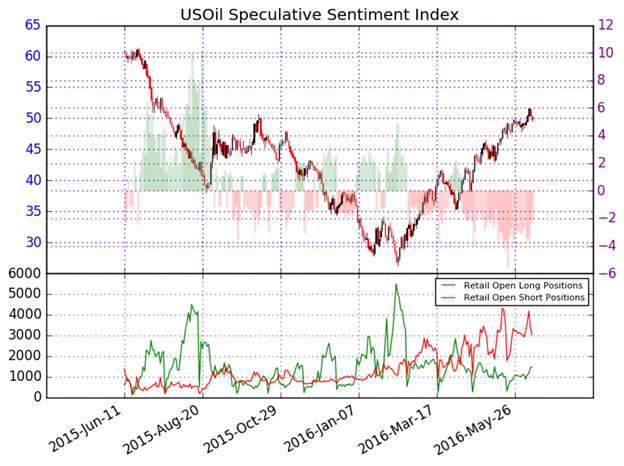 As of Friday, the ratio of long to short positions in the USOil stands at -2.10, as 32% of traders are long. Long positions are 6.1% higher than yesterday and 29.8% above levels seen last week. Short positions are 14.9% lower than yesterday and 10.9% below levels seen last week. Open interest is 9.1% lower than yesterday and 4.7% above its monthly average. We use our SSI as a contrarian indicator to price action, and the fact that the majority of traders are short gives signal that the USOil may continue higher. The trading crowd has grown less net-short from yesterday and last week. The combination of current sentiment and recent changes could favor a push into support mentioned above at ~$49. A break below there could open up the June Opening Range low of $47.72/bbl.