The inventory numbers on Wednesday were expected to show a continual building of oil inventories or stock after the recent API report had shown U.S. crude inventories rose 3.45m bbl last week. As recent U.S. data has underwhelmed investors, many were expecting the weak/ no growth story to strengthen today with less Oil being used to grow the economy.

Instead, EIA Crude Oil stockpiles surprisingly dropped with a draw of nationwide inventory of -3.41mn bbl, which was a stark opposite of the expectation of ~+2.5mn bbl build. Naturally, as Wildfires in Canada continue to do untold damage, there is a reduction in supply, and we’ve also seen supply disruptions globally from tensions in North Africa and Supply Contraction Speculation in the Middle East. However, next week’s EIA will likely to do a better job of showing the impact of the tragic fires in Oil-Rich Alberta.

Either way, a larger draw does show demand is picking up relative to the current stock. In other words, this means that the story of weak growth either has holes or is false.

The above chart is a medium-term price channel via Andrew’s Pitchfork tool with sliding parallels drawn with the slope of the median line off of key pivots. Another key component of the chart is the highlighted Polarity Zone where resistance has turned into resistance where we’ve recently turned higher. You’ll notice on the bottom-left of the chart; the sliding parallels and median lines have acted as key pivot support zones into Q2. Now that we have seen a break above the 200-DMA (currently near $40/bbl), our focus turns higher to the upper parallel line around $48.50.

The Support Zone of $41.85-$43.30/bbl in focus was validated by the forceful move higher. Given this morning’s price action, a shorter-term pivot of the price action of $43.95/bbl is worth keeping on watch. While this level is above the Weekly S1 Pivot at $43.15, the price has respected this level so we shall as well. A breakdown below this level would turn short-term focus neutral and toward the S1 support just mentioned.

This morning’s move took us above the explicit resistance at $46 and should encourage Bulls. However, the ability of crude to close above $45/bbl would show the first closing since the day we traded at a 2016 high of $46.75. The following day the market failed to close above $45/bbl, and we’ve yet to do so even though we’ve seen multiple daily moves above there. An inability to close above $45 again given today’s action shows us that either a stronger move down is at work, or at least a sideways correction is still in the works.

Due to the macro environment, I’m staying bullish for now, and the April high is the next resistance level in focus at $46.75/bl. Beyond there, the Weekly R2 pivot at $47.55 may soon be tested. However, this all assumes the US Dollar doesn’t follow suit of May 2015. 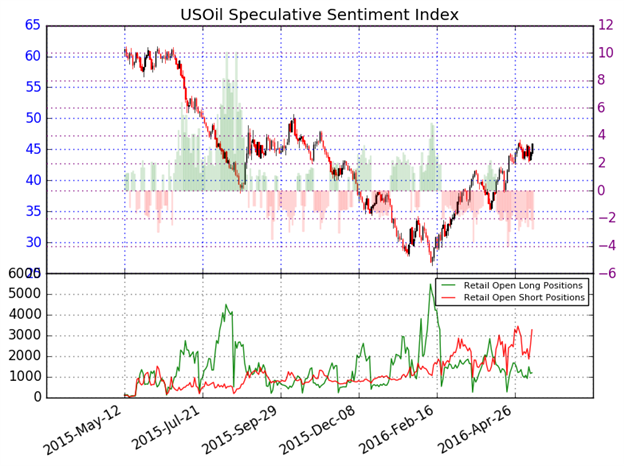 In addition to the technical focus around Andrew’s Pitchfork, the Polarity Zone holding as support, and the moving averages, we should keep an eye on retail sentiment, which favors more upside price action. Further upside is specifically aligned with our Speculative Sentiment Index or SSI for now.

According to client positions at FXCM, the ratio of long to short positions in the US Oil stands at -2.76 as 27% of traders are long. Short positions are 41.3% higher than yesterday and 55.3% above levels seen last week. Open interest is 23.7% higher than yesterday and 14.8% above its monthly average. We use our SSI as a contrarian indicator to price action, and the fact that the majority of traders are short gives a signal that the USOil may continue higher. The trading crowd has grown further net-short from yesterday and last week. The combination of current sentiment and recent changes gives a further bullish trading bias.