The start of April has Oil traders and investors wondering if Q2 will align with the second half of Q1. After hitting a current low on February 11, Oil moved higher by ~61%, and it’s unclear if we won’t see more gains this quarter. Since Mid-March, Bears have rejoiced on the recent pullback, but as you’ll see below, there appears to be an array of support that could be ready to launch Oil further into a Bull Market.

A recent flow of funds indicator helped to show why Oil corrected nearly 11% at the end of March. Fund flows from the most popular ETF, the United States Oil Fund or USO, showed its largest monthly outflow in 5 years in March. The small pullback in light of such a large outflows, nearly $600M could be seen as a sign of resilience for Oil Bulls. Of course, if the outflows continue, then we’d likely fail to make another push toward the 200-DMA, and we could soon see a retest of ~$30.

Outside of the market dynamics, an interesting confluence of technical support appears to be holding up price right now. If these indicators and tools continue to hold up the price, we may be on the cusp of another large move higher in % terms in WTI Crude Oil.

The first easy to recognize form of support is the 38.2% Fibonacci retracement level of the February – March range that sits at $35.80. While a retracement may still be in the works, the 38.2%-61.8% retracement zone is common support in a developing uptrend, and if price fails to push below this level, it may be another sign that we’re about to see another breakout.

Another encouraging sign is the potential of price to move above the Daily Ichimoku Kijun-Sen line that currently sits at $37.70/barrel. Ichimoku is a trend following trading system that allows traders to identify the larger trend at play, developing momentum, and pullback or retracement zones to get into a trade. One of my favorite signs of trend continuation is when the price is above the cloud, and crosses above the Kijun-Sen (blue line), which is the 26-Day midpoint.

To help with the visualization, I’ve plotted a 26-Period CCI on the bottom. The CCI visualizes a move above or below the Kijun-Sen when the CCI line moves above or below the zero line. You can see on the bottom right that we could be gearing up for a breakout. For now, it’s too early to tell, but give the macro environment I think we’re in (risk-on / USD weakness), I would favor a bullish continuation.

As of Wednesday, the 200-day moving average sits below $41 per barrel at $40.69. Given the fortitude of the moving average and its central focus among investors and traders, there is little resistance outside of this level that matters longer-term. Shorter-term, it’s worth focusing on the price being able to push above the Kijun-Sen at 37.70 for optimism.

Turning our focus to support, where I believe we should spend our attention, the zones that catch my attention are the recent corrective low at $35.22/bbl and the 38.2% retracement at $35.80. Should these levels continue to hold as support, we could soon see a rise that would test and potentially break the 200-day moving average for the first time since Q2 2014.

It may also be helpful to watch the CCI(26) below the chart, because if we break back above the zero line, a bull market may be well in force in WTI Crude Oil. In a bull market or a sustained uptrend, CCI can often find support near the zero-line. You can see how well the zero-line held as resistance on the move lower in Q4 2015. If we push higher from here, we could then see a break above the 200-DMA as a potential tipping point higher in the Oil market. If we fail to break above the zero-line on CCI, and the 200-DMA does act as resistance again, we could then look for a resumption of the recently dead US-Dollar uptrend to pick back up, and thwart the Fed’s hopes for a wave of manageable inflation.

Contrarian System Warns of a Test of Key Support Lower 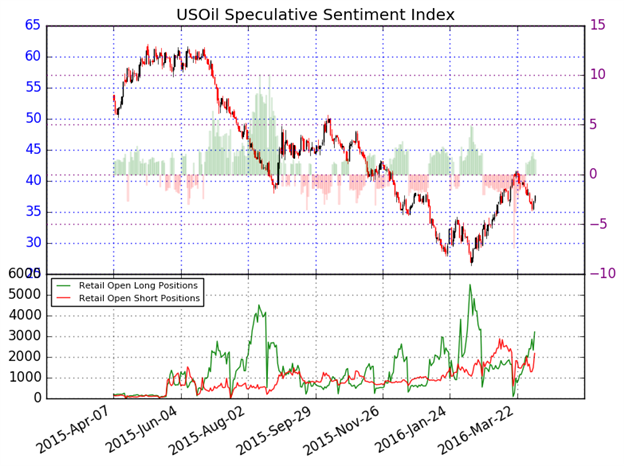 In addition to the technical focus around the CCI zero-line and Fibonacci 38.2% support, we should keep an eye on retail sentiment, which could be warning us of more sideways price action if not a further push lower, which would align with our Speculative Sentiment Index or SSI.

Our internal readings of US Oil show an SSI reading at 1.47 as 59% of traders are long. We use our SSI as a contrarian indicator to price action, and the fact that the majority of traders are long provides a signal that the USOil may continue lower. Short positions are 47.7% higher than yesterday and 14.3% above levels seen last week. Therefore, it is worth noting we could be on the cusp of a sentiment signal. If the reading were to turn negative again, and the price breaks above the 200-DMA resistance, we might well be on our way back to $50/bbl. Until then, we’ll respect the 200-DMA as WTI Crude Oil has since August 2014.