Japanese Yen Back to Crucial USD Range After Downside Break

The Japanese Yen remains stuck in a range against the US Dollar which has reasserted itself consistently whenever it’s been traded out of since March 3.

This makes some fundamental sense as both currencies have clear, counter-risk, ‘haven qualities. Both are sought after when risk appetite is weak and it often is weak as investors pore over coronavirus-related headlines and weigh the cautious reopening of national economies against the certainty of world recession.

Technically speaking the Yen gained a modest upper hand in this haven battle between April 13 and May 6. The gradual USD/JPY slide between those dates took it from above the trading range to a very small foray below it.

However, that didn’t last, and the pair is now safely back above its lower boundary. That comes in at 106.44, the 50% Fibonacci retracement of the rise seen in March. Its upper limit, not coincidentally is the 38.2% retracement at 107.70.

The narrow daily ranges seen in the last few weeks may suggest that this is a rather undecided market, and that a durable range break either way will be in instructive directional clue. Both may be so, but it’s worth pointing out that this range has been quite quickly traded back into in the recent past, even when what looked like decisive breaks to the upside and down have been made.

For now it might be best to bank on this trend continuing in the absence of some clearer signal. That might involve an upside foray as far as the current downtrend line at 110.88, or a move below this year’s low at 101.18.

The Japanese Yen looks more unambiguously bullish against the British Pound, with sentiment generally souring against that unit as the country’s epidemic-handling draws criticism and the possibility of a no-deal Brexit dawns anew. 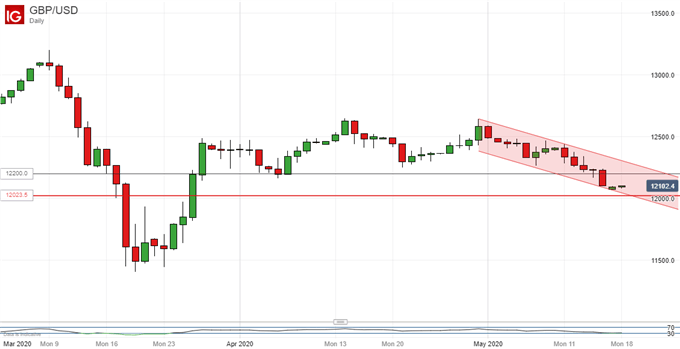 The cross remains within a new, dominant downtrend channel of its own which has taken it below the previous notable low, April 21’s 131.81. That in turn has seen it eye support at 129.76 which, for the moment, still holds. That’s the 50% Fibonacci retracement of the rise from March 18 to April 9 and a slide below that will put those March lows back in focus again.