The Japanese Yen has been hit as have many other currencies by the US Dollar’s rapid emergence as investors’ haven of choice as coronavirus continues to wreak economic and social havoc around the world. Of course the Japanese unit is usually no slouch itself in the anti-risk stakes, but the realization that many investors can see no destination remotely as safe as the greenback has seen the Yen retreat from the three year-highs seen against the Dollar earlier this month. 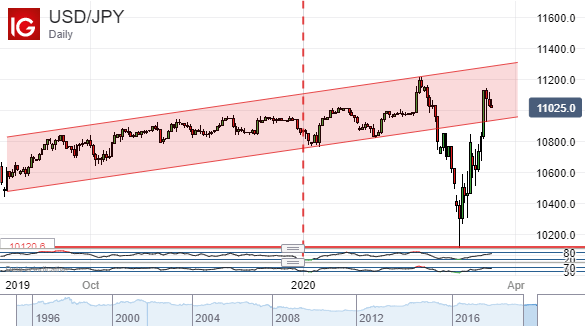 Indeed, USDJPY is now back well within the uptrend channel which had been comfortably in place from the lows of last August until it was broken to the downside in late February of this year.

It may be doubtful that this channel has anything relevant left to tell us given the depth of the subsequent fall below its lower bound. However, that lower bound did once again seem to limit the bear’s intraday foray last Friday so the prospect that the channel is indeed back in play can’t be immediately ruled out.

Dollar bulls will probably be pleased with their March efforts if they can bring about a close within the channel as the month ends. For now, that means they will need to keep the Dollar above channel support at 109.22 and, while they might in more normal trading times have reason to feel confidence, there’s very little margin between that point and the market by the standards of current, volatile markets.

With some sign that momentum is waning again, those bulls may try to regain last week’s peak of 111.28, but if they can’t manage that this week then another slide below the channel bottom looks likely.

The Australian Dollar remains under unsurprising pressure against the Japanese Yen, with the former a clear growth correlated play and the latter still an anti-risk haven, notwithstanding its weakness against the greenback. 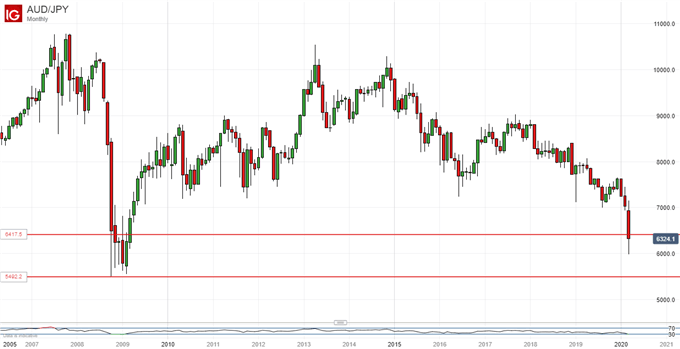 AUD/JPY’s huge monthly-chart slide has taken it back into an area of support stemming from its financial crisis lows of 2008 and 2009.

Despite a strong monetary response from Australia’s central bank, and hopes of more fiscal stimulus ahead it’s very difficult to see the currency finding any sort of strong, fundamental footing for as long as coronavirus dominates the headlines.

The cross remains some way above last week’s notable low of 59.86, but a more lasting retest of that seems all-but inevitable unless there’s a remarkable improvement in sentiment. Mid-month highs in the 65.70 region provide near-term resistance.