The Japanese Yen has made sharp gains against the US Dollar since late February, fundamentally rooted in expectations that US interest rates would fall in response to coronavirus’ economic hit. Those expectations were met this week.

While both currencies can function as anti-risk, ‘haven’ assets, Japan’s negative base rates and ultra-low bond yields mean that international investors are often more likely to favor the Dollar. In turn, however, falling US interest rates make the Yen more competitive.

So much for the fundamentals. Technically speaking USD/JPY has effectively bounced at the fourth, 61.8% Fibonacci retracement of its rise from the lows of August 25, 2019 to this year’s 13-month highs. 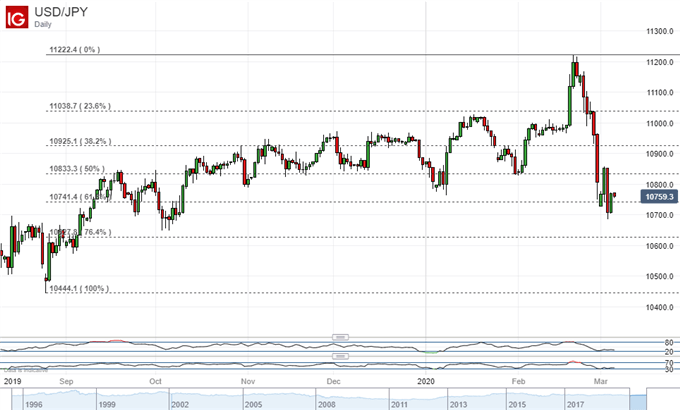 That comes in at 107.41 and, although March 3 saw a daily close below it, the market quickly moved to regain that level. Dollar bulls’ first order of business will probably be try and re-attain the psychological comfort of the 50% retracement level which has acted as resistance since its breach to the downside on February 28.

It comes in not very far above the current market at 108.33. Any durable resurgence in global risk appetite should see this point topped, but those bulls will probably need to pause and consolidate gains there before they can go on to try and take back the sharp falls seen since February 21.

Still, the Dollar looks unsurprisingly oversold at this point and, if that 107.41 support can hold it seems likely to rise at least as far as the 50% retracement level in the coming days.

The Japanese Yen shows comparable vigor against most of its major traded rivals now, with USD/JPY weakness feeding back into other cross rates.

EUR/JPY has clearly breached its medium-term weekly chart uptrend channel to the downside. Its former lower bound now acts as resistance, with upside curbed at exactly that point during the week of February 17. 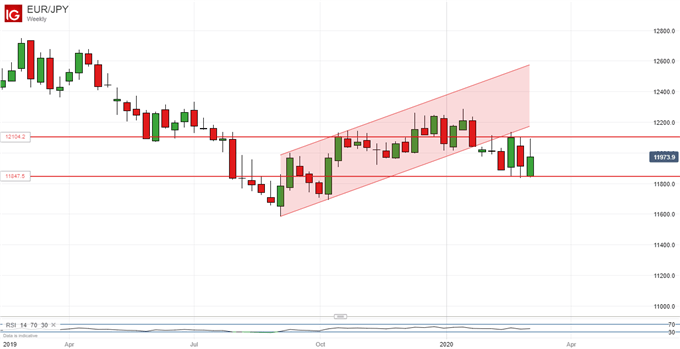 The Euro has support at 118.47. That was the low point of trading on the week of July 29 last year and it seems to retain significance even though subsequent weeks saw it give way. Resistance seems firm at the range top of 121.04 but any resurgence in USD/JPY’s fortunes will probably see that challenged.