The Japanese Yen has been forced down to lows not seen against the US Dollar since the end of 2018 as the US currency gets the best of the fundamental haven bid as coronavirus spreads.

Traditionally of course both currencies offer considerable appeal to investors in times of uncertainty. However, the Dollar’s stronger home economy and the perception that Japan’s very proximity to China leaves it more vulnerable to contagion is punishing the Yen.

Technically speaking USD/JPY has soared above its previous broad trading range and, in the process, snapped a long-term downtrend line which had been in place since June 2015. 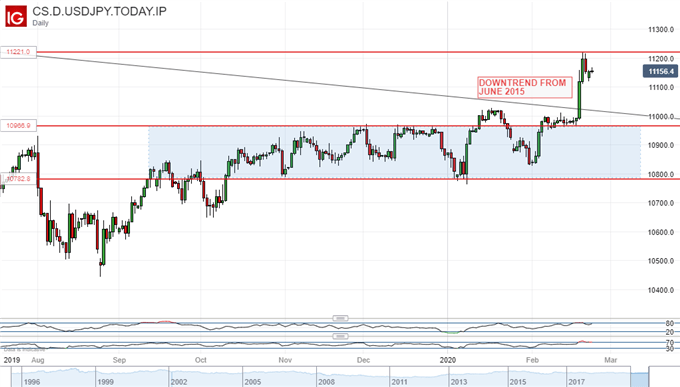 This is exactly as it appears a very strongly bullish signal for the Dollar, but it remains to be seen whether the bulls can hold this important line.

It bears noting that the pair has leaped far above a broad range which has quickly been regained in the recent past whenever it has been traded out of, whichever direction he market broke to. That range also coincides quite closely with the 23.6% and 50% Fibonacci retracements of the rise from August’s lows to last week’s highs. Between them lies 38.2% support at 109.25.

Now of course we may have seen that range’s spell conclusively broken with the most recent upside break, but that is not certain yet. This market could probably do with some consolidation and it will be instructive to see how much lower that process takes it.

There is perhaps a pennant forming on the pair’s monthly chart.

This confluence of trendlines is usually known as a continuation pattern, which means that the previous market trend should resume once it resolves. That would clearly augur well for Dollar bulls as the pennant began to form as the pair rose from the lows of 2012 to the highs of 2015 and suggests that that rise may now resume.

The British Pound has spent much of February rising against the Japanese unit too. However, it has yet to make the sort of clear upside range break seen in the US Dollar’s case.

It’s certainly trying though, with the range top still very much in play. A conclusive break, perhaps going into this month’s close, will bring the highs of December 2019 back into focus but, given a likely pause for breath at least in USD/JPY it may be premature to bet on much lasting upside for Sterling at this point, with a resumption of trade back within the range probably more likely.