The Japanese Yen has backed down against a broadly stronger US Dollar as stronger economic data and hopes for a vaccine against coronavirus have supported the greenback and revived risk appetite at least a little.

More upbeat numbers on the US manufacturing, service sector and labor markets have raised optimism that the US economy continues to power ahead, with the end of impeachment proceedings against President Donald Trump, and his acquittal, adding to risk appetite.

So much for the fundamentals. Technically speaking USD/JPY is up to highs not seen for nearly two weeks on its daily chart. However, the climb has put the pair back above a broad trading band which the market has been disinclined to see it stay out of for very long since mid-October last year. 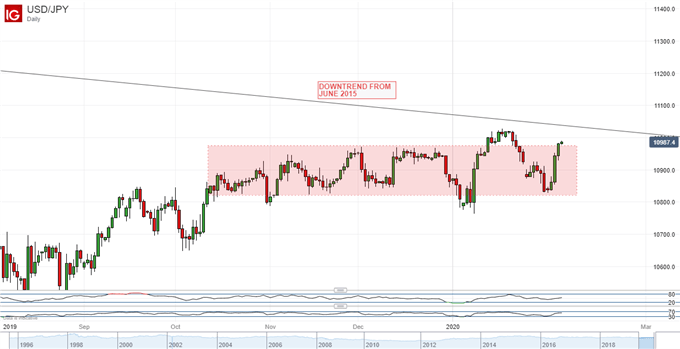 Clearly its break above that range top is by no means conclusive yet, with so far only one daily close above the line to show. Dollar bulls will need to keep the pair above 109.75 to maintain altitude, and the market is at only a few ticks higher than that.

If they can keep it there, January 27’s intraday top of 110.31 will be in those bulls’ sights but getting there and staying there may prove a tall order. That was an eight-month high when it was reached, and the market only managed a few days around that level before retreating back into the range.

It’s worth noting that, for all the Dollar’s recent vigor, the Yen remains in a longer-term ascendant with the downtrend from June 2015 still in place. That is closer to a challenge than it has been for some time, however, coming in around 110.29. A sustained break of that would be bad news indeed for Yen bulls, but it doesn’t look very likely in the near or even medium term.

It shouldn’t surprise that other Yen crosses evince similar traits to USD/JPY right now, with similar pickups visible in both AUD/JPY and NZD/JPY. GBP/JPY is a notable exception among major rates, probably because the Brexit story has lent the British Pound a little more autonomy to respond to more local news. 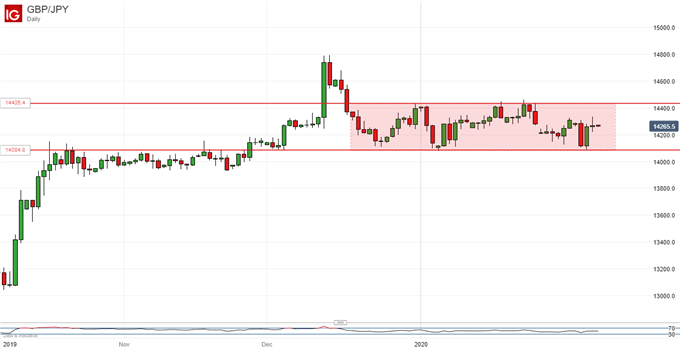 GBP/JPY remains in the broad range that’s been in place since the end of 2019, having just seen an attempt at the base rejected. It’s just possible that the Pound is settling into a new, lower range, however, with its top close to this week’s peak at 143.30, but this will have to await confirmation over the next few days’ trade.