The Japanese Yen wilted last week as the markets moved to price out the prospect of military escalation between the United States and Iran.

Clearly the fundamentals are driving this market now, with investors taking back from the Yen what they gave it in the immediate aftermath of the lethal US airstrike on key Iranian General Qassim Soleimani. With perceived haven assets like the Japanese currency now in less-urgent demand the global market overall is looking with hope to both the looming US corporate earnings season and this week’s scheduled signing of a phase one trade deal between Washington and Beijing.

However, technically speaking it is notable that the USDJPY uptrend line from late August, so conclusively shattered by December 30’s Iran-related plunge, still seems to be forming resistance to the subsequent recovery.

That line continues to cap the market on a daily closing basis but is very close at hand and seems unlikely to do so if risk appetite revives further. A break above it will see May 21, 2019’s high of 110.67 back in bullish focus, where it will remain for as long as that uptrend can hold. However, there seems no great rush to get the pair back up there and this week’s risk events could be crucial to its chances.

Support looks firm in a broad band some way below the market between the first and second Fibonacci retracements of the rise up from August’s lows to the peaks of early December.

Meanwhile the New Zealand Dollar has arguably weathered last week’s risk-off storm better than did its US big brother. NZDJPY’s uptrend channel has remained clearly unbroken, with the cross now attempting to break out of the trading range established within it. 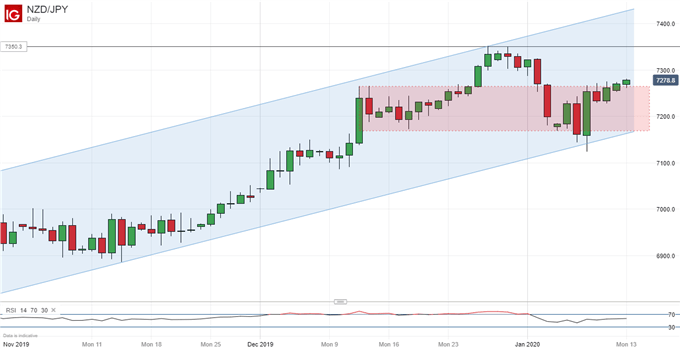 December’s top of 73.50 is an eight-month peak, but it’s also one that didn’t hold for long when it was made. The market quickly traded back into range. A repeat performance is something to be on watch for as the market climbs back toward that figure.