Japanese Yen Likely to Slide Further Once 2020 Trade Fires Up

The Japanese Yen has seen a holiday-season pause in the pressure it’s been under against the US Dollar but this hasn’t seen a huge retracement for the USDJPY and looks unlikely to last once 2020’s trade gets back into top gear. 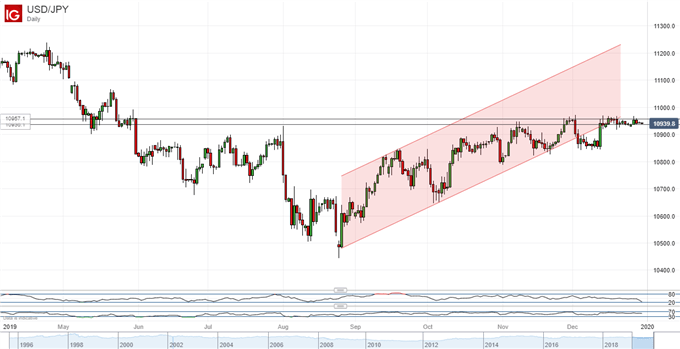 Action since then on a daily closing basis has been confined to a narrow trading range between 109.36 and 109.57. Breaks of this range may not be trustworthy until market volume revives. It’s clear in any case that the US Dollar has not seen any great selling impetus into the holidays, with current trade looking then very much like consolidation, which was probably needed anyway.

Dollar bulls’ pressing upside target is probably still May 21’s high of 110.62. The market may face an uphill struggle to hang on at that level, but the bulls will need it to if they’re to go on and challenge 2019’s April highs. Assuming the current range does hold into full, new year trading, they are likely to keep trying.

NZDJPY has risen consistently since early October, boosted fundamentally by increased optimism around a trade deal between China and the United States. 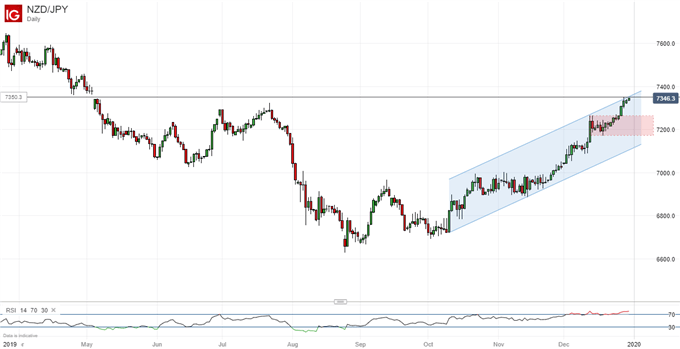 However, the kiwi now looks a little overstretched. Its charge has taken it up through the nascent trading range apparent until the end of last week to the point where it is challenging the top of the uptrend channel in place since late October.

Like USDJPY the cross is heading back towards resistance which guards 2019’s peaks, and may yet break through them. However, the New Zealand Dollar looks quite seriously overbought at current levels. IN a thin market it would be no surprise to see a slide back to that former range for a period of consolidation, at least, before a resumed move higher.