The Japanese Yen has settled into a broad range trade against the US Dollar which seems likely to survive the holiday season, but weakness may well resume for the Japanese currency once things pick up in 2020.

With that in mind breaks either way should probably be viewed with suspicion until then, with USD/JPY looking effectively capped by resistance quite close to the current market at 109.67. 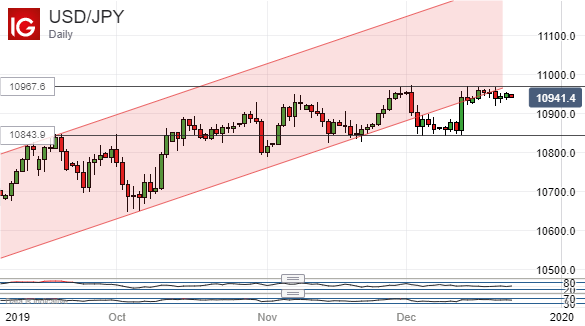 That was the last significant peak, scaled as the intraday high of December 2 and not topped since.

Range support looks comfortably far off for Dollar bulls, all the way down at 108.44. There seems very little chance of this being tested again in the near future. Any forays toward it in the next week or so will face near-term support at last week’s low of 109.19 as well as that in the 108.74 region where the pair held between December 2 and 12.

The pair has clearly fallen out of the ascending channel which had contained the market between August 26 and December 2 and the bigger question is whether the current range trade is merely an extended pause in that rise or a topping out.

At present the former scenario looks more likely, with the pair close to its range top. It will take a concerted effort by Dollar bears to break below the current range to force a rethink and that doesn’t look likely in the near term.

The New Zealand Dollar looks more unambiguously bullish against the Japanese currency, with the uptrend in place since October 10 unthreatened. 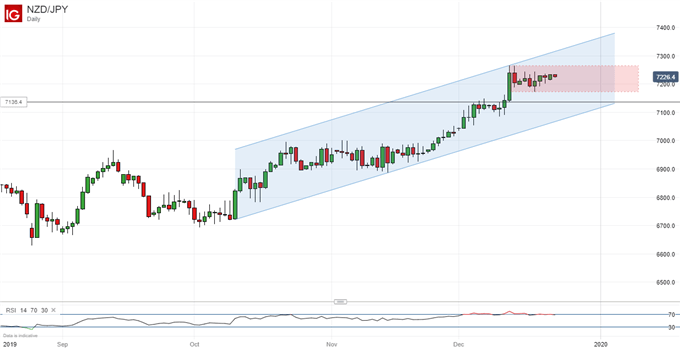 That uptrend is in any case an extension and acceleration of the rise up from this year’s lows. They were made in mid -August.

The cross does seem to have settled into a narrower range within that uptrend, but, with the ascending channel base a very long way off, this need not overly concern NZD bulls.