The Japanese Yen is back on the defensive against the US Dollar with USD/JPY’s slip below its dominant uptrend channel looking more like consolidation than the start of a meaningful leg lower. 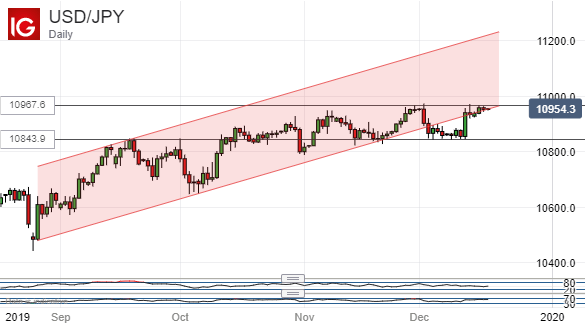 It is possible that the channel itself is a little short of predictive power, especially when it comes to the upside which hasn’t faced a serious test since late September. That said the lower range still looks important as it appears to be acting as resistance on the daily chart now.

The Dollar has also settled into a broad range between 108.44 and 109.68, with the latter, upper bound of that coinciding nicely with the range base. In any case the top of that range is where the market is now, and it seems unlikely that we’re going to see any enduring Yen strength for as long as that’s the case.

Dollar bulls are likely to remain in the ascendant, having now clawed their way back above the steep falls seen between August 1 and 13. Their next target is likely to be May 21’s peak of 110.66. Investors should be aware that thinner market conditions into the end of the year may make the durability of any move suspect, but for as long as the current range holds it seems more likely that the pair is set to move up.

The Euro is similarly in the ascendant against the Japanese Yen, having broken at last above its own range top last week.

This market seems unlikely to fold for as long as USD/JPY retains its vigor. However, it is worth noting that that former range has been traded back into quite quickly whenever it’s been abandoned since mid-October.

While the current upside break looks more decisive it may not be. Euro bulls will probably have to get up to the previous significant peaks, made in July around 123.23 to lock it down.