The Japanese Yen has been struggling against a generally resurgent US Dollar since August but looks as if it is at last gaining the upper hand. 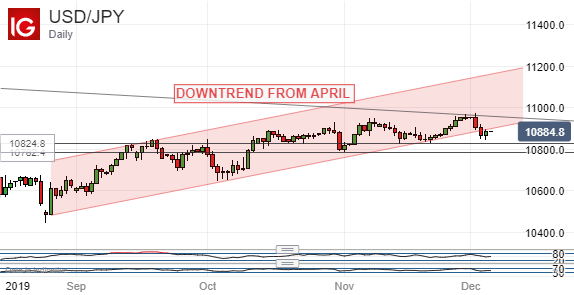 The upward channel from those August lows has broken to the downside on a daily-closing basis for the first time this week. Within the channel Dollar bears have long made their presence felt, with the last serious upside test made way back in September.

It’s also notable that a failure to regain and top recent highs in the 109.68 region would mean that Dollar bulls have failed to snap an overall downtrend in place since April.

If they can’t regain the channel base, and they may yet do so, near-term support will come in between 108.25 and 107.82. Those points held the bears on November 21 and 1, respectively. Clearly a slip into that trading band would put the October lows back into play, around 106.75 with the entire rise from August under threat should they give way.

The British Pound meanwhile has leaped up to six-month highs against the Japanese unit, and indeed against other major rivals. The markets scent and applaud a working majority for the incumbent Conservative administration in next week’s general election.

It’s worth remembering that polling has been distinctly out in many recent UK voted, however, and that there’s still plenty of campaign time to go. Sterling bulls would clearly prefer that the current government be returned with a majority, seeing this as clearest path to any near-term Brexit progress at all, with bids for the currency usually following evidence of a poll lead.

Technically GBP/JPY has been in a narrow band since mid-October, with modest daily ranges the norm, as if to underline the prevailing uncertainty.

The break higher puts the former range top in play as near-term support with a further prop likely below it at November 18’s closing high of 140.82.

It will be fascinating to see whether the Pound can establish a new higher trading range before the vote, but volatility and a return to the former band looks much more likely.