Investors were treated last week to the strange spectacle of the Japanese Yen struggling against the US Dollar last week despite USD/JPY having broken below a previously dominant uptrend channel. 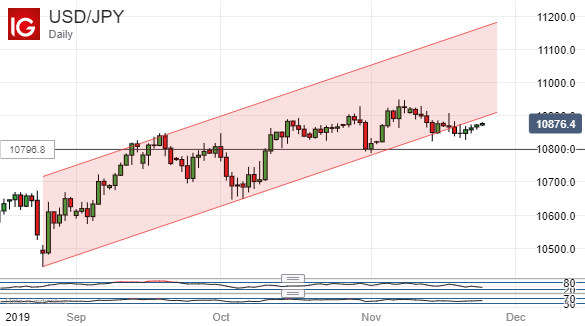 The reasons for this distinctive chart pattern can be found not in technical analysis but in the fundamentals where, as ever, the US-China trade story continues to drive. USD/JPY wilted from its peaks of early November as news-flow increasingly suggested that even an interim trade deal looked unlikely. More recent commentary has been upbeat, with US President Donald Trump suggesting that an agreement was ‘potentially very close.’ However, this story will doubles provide plenty of volatility yet and gains based on it are difficult to rely on. There will also have been some pass-through to USD/JPY from the general Dollar strength underwritten by the latest weakness in European economic data.

Technically speaking the Dollar is clearly still prey to the sort of narrow daily range between the open and the close which speaks to a degree of uncertainty in the market. It might be modestly encouraging for the bulls if they can get gains to stick above near-term resistance at 108.79. That was November 13’s close and it was abandoned then regained in the subsequent two session. If the market can hold on around that level then the bulls may be tempted to push on toward the November high of 109.48 but caution would probably be warranted in that event.

Support comes in at 107.97, the recent notable low made on October 31. The pair seems likely to be confined to a range between those two points unless there is some solid fundamental news on the trade front.

The Japanese currency is even more obviously range-bound against the British Pound. GBP/JPY is however quite steady close to six-month highs as the UK’s general election looms on December 12. So here, once again the fundamentals are driving. 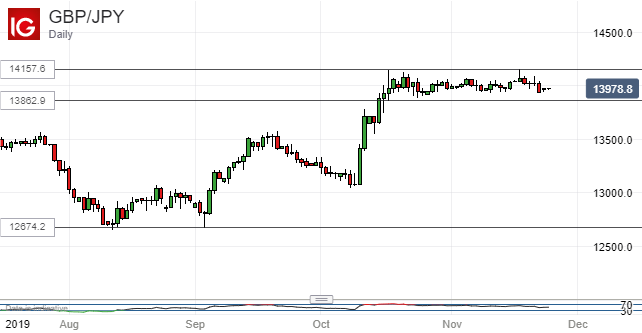 Based on recent polling investors seem reasonably certain that the current Prime Minister Boris Johnson will win. However, much will depend on the size of his majority. Any outcome which allows the Conservative party to govern alone without the need to court others will probably see the Pound rise across the board. A less emphatic win would see it plunge.

The immediate upside target would be the current range top at 141.48. That would probably be left far behind in the event of a win for the Prime Minister. Initial support lies at the range base of 138.63. That is also very close to the first, 23.6% Fibonacci retracement of the rise from October’s lows. The next retracement support level below comes in at 137.44 but it’s hard to see the range breaking to that extent before the election result is known.