Spot USD/JPY prices have climbed roughly 4.5% from its year-to-date low printed on August 26. The 2019 bottom near 104.50 – which surpassed the January 03 JPY flash crash low – marked the start of a slow and steady climb in the US Dollar following Fed Chair Powell’s Jackson Hole Symposium speech where the head central banker capitulated to the market’s dovish FOMC rate cut expectations by stating “we will act as appropriate to sustain the expansion.” The remark came subsequent to the Fed’s first 25-basis point interest rate cut in roughly a decade in the midst of the Great Financial Crisis.

The Federal Reserve proceeded to deliver another two 0.25% rate cuts to round out the 1990s-style ‘mid-cycle adjustment’ over its next two policy meetings. Looser financial conditions from the Fed helped provide ‘insurance’ against a rise in downside risks to its outlook which stemmed primarily from ongoing Brexit developments and lingering US-China trade war uncertainty. This – along with hopes that US-China trade talks will progress toward finalizing a phase one trade agreement and prospect of another Brexit pause – has broadly fueled a resurgence in risk appetite. 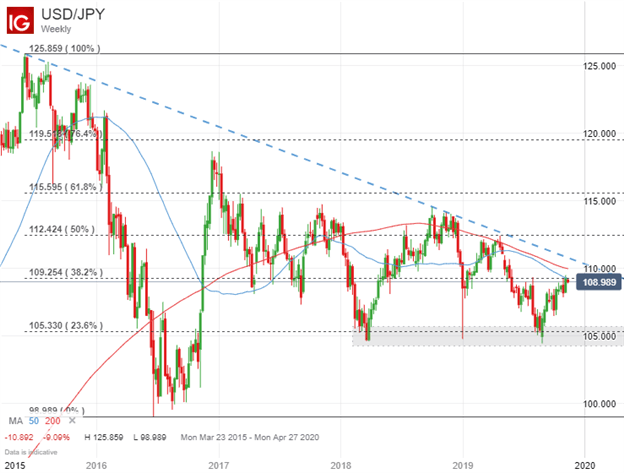 Following firmer language communicated in the October Fed meeting press statement, however, spot USD/JPY pries were able to rebound further on the diminished prospect of future FOMC rate. While this has boosted the relative attractiveness of the currency carry trade, which is widely bolstering USD/JPY, another influx of risk aversion and forex volatility could cause an abrupt reversal lower in the US Dollar relative to the Japanese Yen.

That said, potential for a breakdown in US-China trade talks lurks on the horizon and could serve as a catalyst that sparks the next breakdown in spot USD/JPY prices – particularly seeing that Fed Chair Powell left the door open to cut rates again if the US economy shows signs of deteriorating further. USD/JPY technicals also paint a less-sanguine picture of USD price outlook against its JPY counterpart.

A weekly chart of spot USD/JPY reveals the currency pair’s broad downtrend over the last 4 years identified by the series of lower highs. Also, spot USD/JPY prices are flirting with confluent resistance posed by the 38.2% Fibonacci retracement of its trading range since the May 2015 peak. The 50-week simple moving average may also begin to exert downward pressure on spot USD/JPY pries. A sustained reversal lower could eye a retest of technical support around the 105.00 handle. 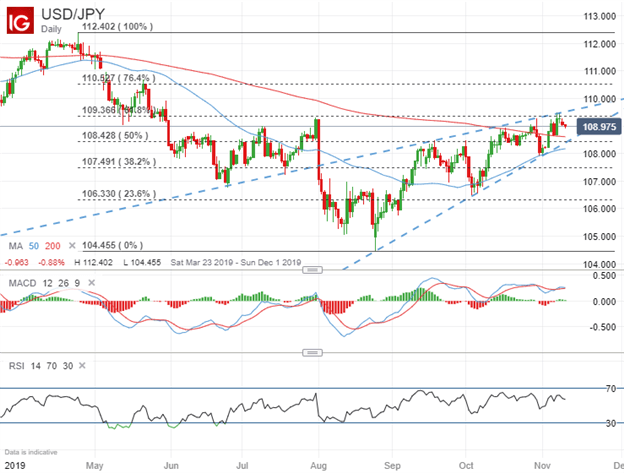 Honing in on a daily timeframe brings to light a bearish rising wedge chart pattern with the US Dollar showing signs of losing upward momentum near the 109.00 price zone with spot USD/JPY edging lower. This area of technical confluence is underpinned by the 61.8% Fibonacci retracement of the currency pair’s year-to-date trading range and July 31 intraday swing high.

Though there certainly is potential for USD/JPY to keep churning higher with a looming bullish ‘golden cross’ of the 50-DMA and 200-DMA to keep spot prices afloat, the broader path of least resistance points to a lower trajectory judging by bearish divergence indicated by the MACD and RSI.

Eclipsing technical resistance posed by the 109.00 mark, however, could see USD/JPY bulls target the 110.50 price level highlighted by its 76.4% Fib. A breakout below the rising support line of the bearish wedge pattern could cause bearish price action to accelerate and push spot USD/JPY down toward the October lows before the 105.00 handle comes into focus.