Japanese Yen May Keep Struggling Against Resurgent US Dollar

The Japanese Yen has come under renewed pressure against a generally resurgent US Dollar which shows little obvious sign of abating anytime soon.

Fundamentally the Dollar’s strength is rooted in the Federal Reserve’s apparent disinclination to underwrite multiple interest rate cuts given the relative strength of the US economy, and in haven demand as the US-China trade story twists on.

USD/JPY has powered up to highs not seen since late May, with the exception of one intraday high on August 2. 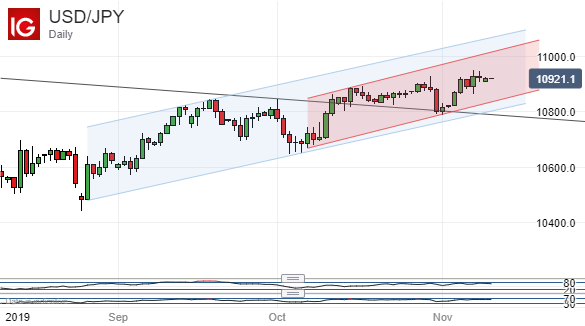 The pair is now within an uptrend channel in place since October 7 and which is itself only a better respected section of a longer channel up from the lows of August 25. Within that channel the Dollar has managed to break above its previously dominant downtrend line and consolidate that break with a bounce at the line on October 31. After that it went on to make a higher high above the previously significant peak, which was made the day before.

There’s little sign that this uptrend is going to reverse anytime soon, although momentum indicators are building, and some consolidation may be seen this week or next. Near-term support comes in at 108.30. That’s the first, 23.6% retracement of the rise up from August’s lows to the peaks of last week. That should hold unless global markets see a broad shift in risk appetite, but support below it might be shaky all the way back to 106.96. That’s 50% retracement of the overall rise and also the pair’s base from October 9.

The British Pound returned to highs not seen since May against the Japanese Yen as October bowed out as the markets moved to price out the prospect of a no-deal exit from the European Union in view of the new deal agreed between London and Brussels. 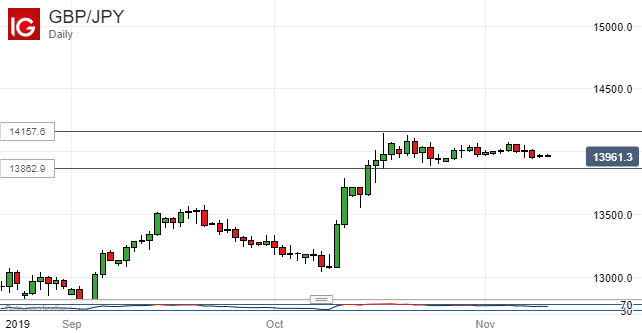 The cross has been perhaps surprisingly stable on its daily chart as November has got under way, despite general election looming in the UK next month. The pound has been confined to a narrow trading band with support around the 139.00 area. This is defended by nearer-term support 139.36 which is where the Pound staged a modest bounce on October 26.

GBP/JPY will remain vulnerable to fundamental news-flow and polling headlines until the election is out of the way, but the markets don’t seem inclined to sell it very far for as long the incumbent government, and its deal, are commanding support.