The Japanese Yen gained on the US Dollar last week as the Federal Reserve’s interest rate cut weighed on the latter, fully expected though it was.

Still, USD/JPY has bounced at a technically interesting point which may offer some clues as to the likely way ahead. 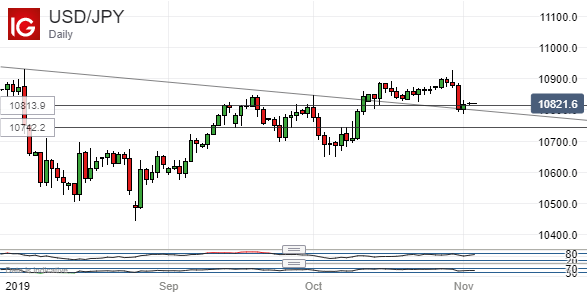 The 108.14 point nearly marks both the current position of the previously dominant downtrend line and first, 23.6% Fibonacci retracement of the rise up from late August’s lows to October’s highs. If Dollar bulls can hold above that point this week then their first order of business will be to try and reclaim the sharp falls seen on the ‘Fed day’ of October 31.

That will involve a probably much more gradual grind back up to the 108.70 level, in prospect as long as 108.14 support holds.

If it doesn’t then it may be that the former downtrend is back in play, but either way market focus will quickly revert to 107.42 which is the next retracement level. October’s lows will beckon strongly if that level faces a test.

EUR/JPY’s climb has run into similar difficulty with the cross confined to a broad trading range since mid-October.

Euro bulls may take some comfort from the fact that the market has been reluctant to retreat far and that its broad trading range has just survived another test.

The range top looks safe enough, however, and they may have to face another trial of that base at 120.39 before too long.