The Japanese Yen seems to have regained the upper hand against the US Dollar once more. Plentiful global uncertainties, crowned perhaps by the still-deadlocked Brexit process, conspire to fundamentally support anti-risk bets like the Japanese currency.

Technically however the daily-chart picture looks a little more complex. 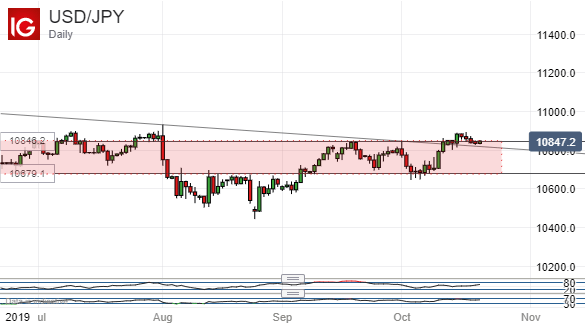 USD/JPY has risen this month to highs not seen since early August. In the process it has broken above the previous downtrend line. This may be a moderately bullish short-term sign but important to remember that this had only been in place since late-May and may have little significance in the context of the entrenched downtrend from the highs of September 2018.

USD/JPY Has Not Thrived At Current Levels

What may be more significant is the pair’s current flirtation with the top of a wide, interesting trading band in place since late May and shown in red on the chart above. The Dollar has been disinclined to spend very long outside this band, trading back into it when below and, more obviously, retreating quite smartly when above.

USD/JPY does seem to have made a ‘higher high’ in the past week, by surpassing the previous notable top which was September 18’s 108.46 close. Probably not coincidentally, that point just about marks the top of the trading band.

Clearly a little caution is warranted here. The most likely scenario is probably that USD/JPY retreats below that level, even if it doesn’t fall as far as the range base at 106.79.

If Dollar bulls want to make that most recent higher high count, they’re going to have to back it up with a sustained period above 108.46, involving at least a weekly and, preferably a monthly close. The uncommitted may want to wait and see if they can manage this and take a bullish signal if they can. But it doesn’t look very likely at this point.

The British Pound soared to five-month highs against the Japanese unit last week as hopes rose of a Brexit deal passing Parliament. While there is still a chance that it will, there’s plenty of uncertainty to go around still and GBP/JPY has clearly stalled again. 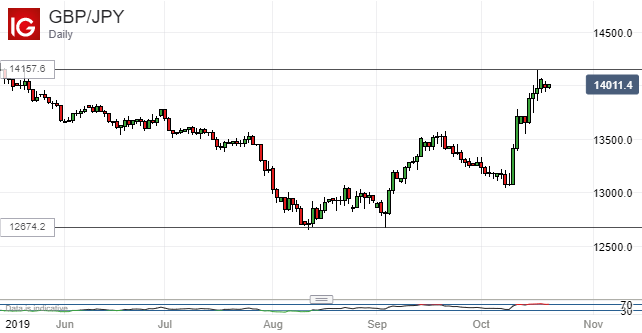 This cross is overwhelmingly in the grip of its fundamental story, and October’s gains will remain extremely vulnerable to more Brexit delay. While they may not be subject to complete near-term retracement, near-term support probably comes in around mid-October’s resting point of 137.17. There may be stronger support at September’s high of 135.66 but any near-term foray to that level may see sufficient bearish momentum built up to threaten the entire rise up from August’s low.