The Japanese Yen has had a good deal of fundamental support from worries that trade talks between the US and China may not be going anywhere. Thursday’s report that the US is considering a currency pact with its rival has lifted the mood somewhat but risk appetite remains fickle and will be driven by the headlines from Washingon.

Obviously, any signs that the talks are struggling, and that the two countries’ reciprocal tariff war will go on, will help perceived haven assets such as the currencies of Japan and Switzerland, while signs of progress will weigh on both.

Technically USD/JPY has slid to one-month lows in the past ten days, but there does seem to be a degree of reluctance on the part of the Dollar bears to push matters below that point at present. 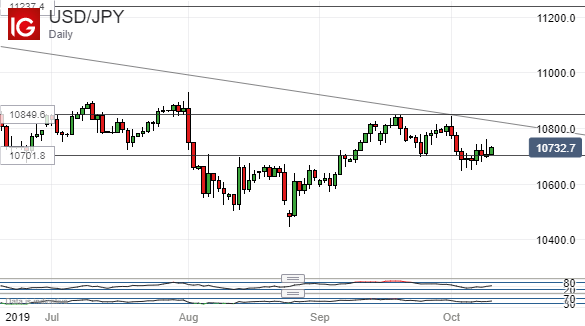 That point marks the brad range base which had contained the pair from early September until October 2. However, the Dollar is now back above that point but looking far from comfortable there and the level still bears close watching.

Clearly the fundamentals are now driving this market and the uncommitted may be well advised to wait at least until the current round of trade talks concludes. If USD/JPY can remain close to current levels when they do, that might be a sign of some resilience both in the Dollar and risk appetite.

However, even if no sharp falls are seen, the pair will still be well within the long downtrend which has capped the market since late April and which shows no sign at all of letup.

It now comes in well above the market at 108.21. Assuming that support holds, Dollar bulls’ first order of business will probably be to reclaim the sharp falls seen between October 1 and 3, which would put focus on resistance at 108.04. IF that can be retaken then the range top at 108.40 will be the next point of interest.

However, at present the market looks a bit stretched with the range base probably far more important. Should it give way, support from late August in the 106.57 area will be eyed.