The Japanese Yen has managed to keep the US Dollar confined to a broad trading range despite strength in the latter feeding through largely from EUR/USD as the clear economic divergence between Europe and the US continues.

Fundamentally speaking there remain more than enough global risks to keep havens such as the Yen underpinned, although a very strong calendar quarter for the US unit suggests that USD/JPY could see more gains in the near future.

For now the pair remains effectively capped on its daily chart by resistance at 108.40. This point stymied Dollar bulls’ best efforts on September 18 and once again on September 30. It formed the intraday top on both occasions. Between those two days the pair broke below the uptrend channel which had previously held sway between August 6 and September 20. The pair has range-traded since, however, rather than falling sharply which may be an encouraging sign for Dollar bulls.

Further encouragement would be had if USD/JPY could break above the top of its recent range and get up as far as 108.68 resistance. That action would mark the full reclaiming of the sharp falls seen between August 1 and August 5 and as such might offer at least powerful psychological support for more gains. 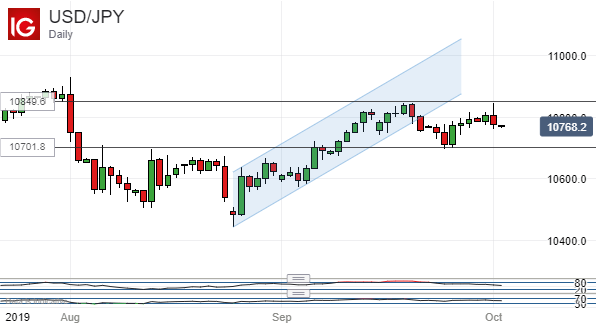 Obvious support between current levels and the range base remains hard to spot on the daily chart, with that base coming in quite close to the market anyway, at 107.02.

The New Zealand Dollar on the other hand remains biased unambiguously lower on its own charts against the Japanese Yen.

The overall downtrend from July 22 is still clearly in place and, indeed hasn’t faced serious challenge since mid-September.

The cross also appears to be forming a telltale ‘pennant’ formation via the characteristic triangular tracing of crossing downtrend and uptrend lines. This is typically what’s known as a continuation pattern which means that the conditions which preceded it are likely to reassert themselves once it plays out.

In the case of NZD/JPY that would clearly point to further falls, probably with August 25’s low of 66.09 as initial support.