The Japanese Yen is enjoying a burst of strength against the US Dollar which has seen an important USD/JPY uptrend snap, but it’s too early to say that this is anything more than a consolidative blip.

USD/JPY’s rise up from this year’s August lows was repulsed last week by a notable resistance level. Coming in at 108.30 it is, not coincidentally, exactly 50% Fibonacci retracement of the fall from 2019’s April highs to the lows of last month. 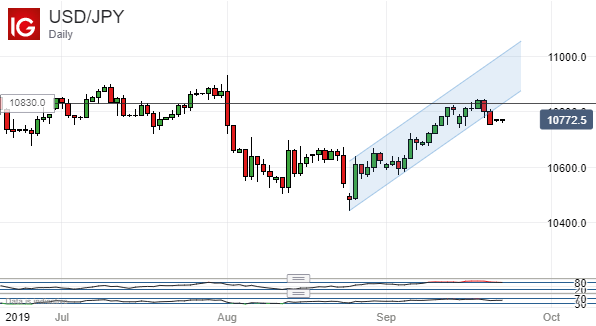 The Dollar has enjoyed a pretty good run through September and some consolidation may well be no bad thing. Momentum indicators unsurprisingly suggested a degree of overbuying last week and, as long as falls from here are not heavy, the uptrend will probably resume fairly quickly with that 108.30 resistance back in the bulls’ sights. If they can top it, then the 108.75 region will be in upside focus next. A sustainable push that far will probably take a bit if time and may have to await October’s trade now. However, it would be likely a strong psychological lift for the pair as it would mark complete retaking of the ground lost in the sharp falls of early August.

To the downside there’s clear support at the first Fibonacci retracement of the past month’s rise. That comes in at 107.52, exactly where the pair bounced on Friday last week. Should that point give way on a daily close, the next key support will come in at 106.93. Dollar bulls will probably try to take charge before that point is seen, however, unless some global fundamental headline sinks risk appetite.

Given the close correlation to be seen across markets at the moment, it’s not perhaps surprising that many Yen crosses should mirror action in USD/JPY. Sure enough many do, if to varying degrees.

The Australian Dollar seems under particular pressure having topped out in the last couple of days well below the shallow downtrend on its daily chart.

There seems very little prospect that that level will be challenged anytime soon, and certainly not before month-end. Immediate support levels to watch are probably 72.40, August 13’s closing peak, and 71.29 where the cross made a modest base on September 2.