The Japanese Yen remains on the defensive against the US Dollar and that makes a lot of fundamental sense.

There’s a clearly more constructive tone on trade between the US and China, while the European Central Bank has already opened the gate to more stimulus. Both these stories have seen demand for countercyclical assets like the Yen reduced as investors feel more comfortable with riskier, better-returning bets. Last weekend’s Saudi drone strikes may have reminded them that we’re in an uncertain world, but it has yet to seriously bring haven assets back into vogue.

Of course, like most other markets, USD/JPY is to some extent on hold ahead of Wednesday’s monetary policy decision from the US Federal Reserve. However, technically speaking the pair remains well within the uptrend channel which has bounded trade since the Dollar bounced on August 25. 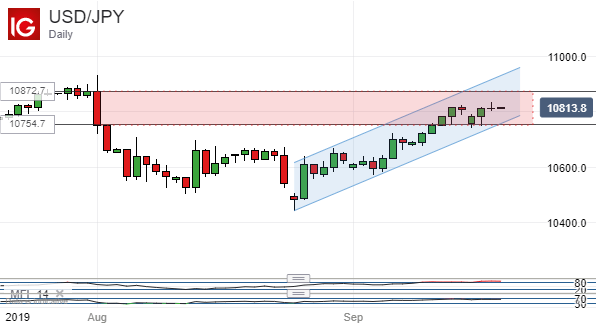 USD/JPY is currently stymied by a resistance band which broadly comes in at the opening and closing lows of August 1. That day saw a very broad trading range and, in the event, a sharp fall which was to mark the start of vigorous action by Dollar bears.

Surmounting it would be a major psychological victory for the bulls, then, especially if they can hold gains around 108.73- August 1’s opening point. For as long as that broad uptrend channel holds there’s every chance that they will do so, but further near-term gains may have to wait, whatever the Fed does this week.

USD/JPY looks overbought on both its Money Flow Indicators and its relative strength index. A pause for breath would probably be constructive and, if it takes place around current levels, probably no barrier to further, gradual gains toward the range top.

Japanese Yen markets are quite closely correlated at the moment, an understandable fact given the role of overall risk appetite in trading now.

However, GBP/JPY has perhaps outpaced the pack with its gains, as markets have moved once again to price out the probability of a no-deal Brexit. The cross is duly back up to peaks not seen since late July. 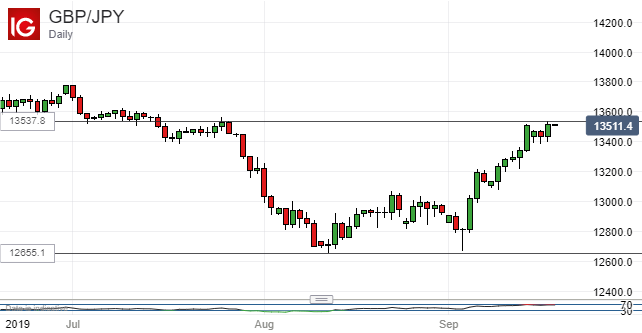 However for all its current vigor the British Pound remains extremely vulnerable to newsflow and a little overbought too.

There’s clear immediate support around the 133.45 area where the market has based for the last week or so. However, that may not survive any determined test and reversals could soon find themselves looking at support at 131.95, which was September 4’s peak.

Resistance comes in around the 136.12 region which is where the cross topped out in mid-July. That barrier guards the way to July’s peak in the 137.37 area, but it is very hard to see the cross getting that high and staying there under current conditions. Some pullback looks much more likely in the near term.