The Japanese Yen’s countercyclical ‘haven’ position has seen it weaken against the US Dollar since late August. Markets have become more cautiously optimistic on US-China trade truce prospects and also hope for more monetary accommodation from the major central banks.

USD/JPY has now risen consistently since basing on August 25. It has been in a well-respected uptrend channel ever since, gaining for twelve days out of seventeen. 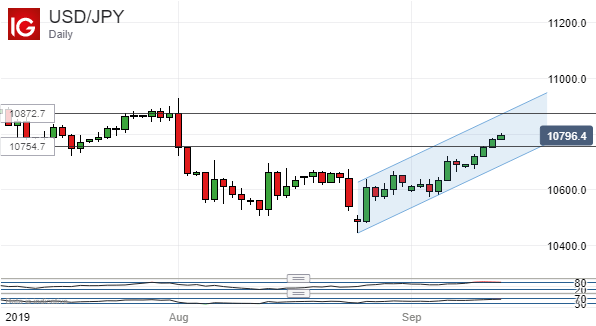 The uptrend channel is relatively narrow but nonetheless looks quite secure at present. The pair looks quite secure within it, too, with the lower bound more than a full Yen below the market at 106.80. That point must now be regarded as important near-term support, but there’s another likely prop closer to hand at 107.55. That’s the closing low of August 1, and important point for the bulls as they attempt to claw back the heavy falls seen between July 31 and August 5.

If they can do so by reclaiming the 108.73 region it could be a powerful psychological boost. That is the probable first key resistance. Dollar bulls should be able to get there but they may need a period of consolidation first.

Given the highly correlated nature of markets right now, it shouldn’t be a surprise that many major Yen crosses exhibit similar traits right now, and indeed they do.

EUR/JPY is no exception, but it has perhaps risen a but less vigorously than most, and bounced a bit more recently.

On its daily chart the single currency seems to be trying to edge into a resistance zone marked by the closing top of August 13, a notable recent peak. It hasn’t quite made it there yet but, assuming risk appetite doesn’t get a left-field knock, it seems likely to, probably quite soon. A weekly close above that point would put August 6’s intraday top of 119.72 in play.