The Japanese Yen remains the beneficiary of a broad fundamental haven bid against the US Dollar with USDJPY bulls’ current modest fightback unlikely to last.

The pair got a boost on Tuesday of this week when the Trump administration indicated that some tariffs against China could be delayed. 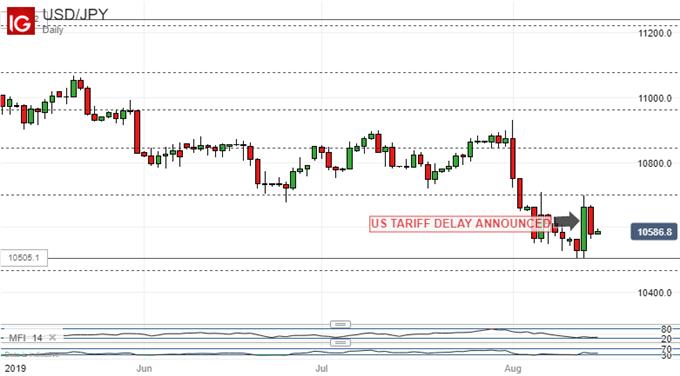 However, much of that rise has already been retraced and the Dollar remains very close to lows not seen since March 2018 if the ‘flash crash low of 104.68 hit on January 2 this year is ignored. If as currently seems likely the pair is indeed topping out again, support can be expected at those previous significant low. That come in at 105.05. Should they give way in turn, then more interesting and possibly resilient support lies below it at 104.65.

That point is complete, 100% Fibonacci retracement of the rise up from the lows of March 2018 to the peaks of last October. A slide below those could signal an intensification of both risk aversion and a broad Dollar bearish environment. If it does, then a cluster of monthly chart support from June-November 2016 would probably come into focus between 105.05 and 99.14.

Retracement as far as that lower bound does not look at all likely in the near term, but a break below near-term support is likely to put a lower range in play, and possibly for some time in the absence of some fundamental good news from the trade front. So keep a close eye on those recent significant lows.

With USDJPY under such clear strain it should be little surprise that other Yen crosses are feeling the pain too, and sure enough most are. AUDJPY has clearly weakened too, but looks a little more range-bound than most, albeit within a fairly broad band.

If as seems likely the cross has topped out at this week’s highs, then a retest of the range’s lower bound looks likely in the coming few sessions. However near-term support at its most recent lows in the 71.05 area would have to give way conclusively first, and probably bears keeping a close eye on. Should it hold, Aussie bulls might try a test of the upper limit.