The Japanese Yen has strengthened over the past week as demand for perceived haven assets had added to its allure.

A persistent slide in US Treasury yields, waning hopes for Chinese-US trade settlement and the possibility of new US tariffs on European goods have all added to investors’ already lengthy worry list, so it’s hardly surprising that the Yen should play its hallowed fundamental role.

Technically USDJPY’s late-June bounce seems to have petered out at this week’s highs of 108.51 or so. This level was traded around between May 31 and June 19, a period which saw nearly two weeks of rather moribund market action shown in red on the chart below. 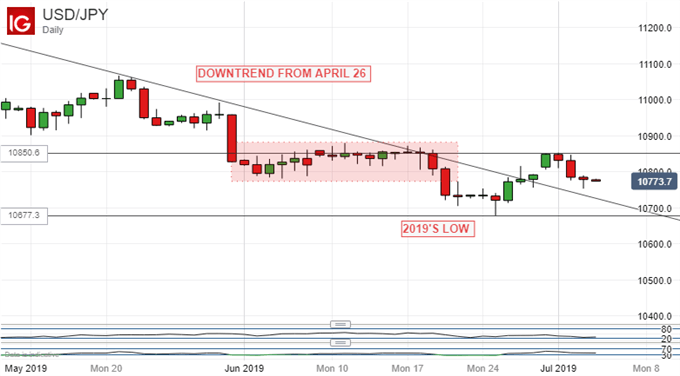 Still, the pair remains above the formerly pervasive downtrend line which has marked the Yen’s strengthening since late April. With the US disrupted for the Independence Day break it might yet be premature to write off the latest Dollar rally completely.

The Greenback is by no means overbought judging from its momentum indicators and this market may not need much excuse to get the rally back on track.

Immediate psychological support can probably be found on the downtrend line, which would put it at 107.29 currently. Below that the year’s effective low at 106.77 would probably come back into focus. Dollar bulls’ immediate concern will be to regain last week’s peaks. If they can then they can concentrate on the more impressive upside target of 109.59. Regaining that on a daily closing basis would see the sharp falls of May 31 completely erased.

That looks like a tall order for the present, but if the Dollar can get through the holiday period without falling to far then it’s also a realistic upside target for the coming month.

The Japanese Yen is doing similarly well against the British Pound at the moment. Much of the action in GBPJPY would seem to mirror that in USDJPY, with the year’s lows still uncomfortably close.

A look at the monthly chart makes Sterling bulls tricky position a little more obvious, with GBPJPY clearly testing the bottom of a range which has do far endured on a monthly-closing basis since November, 2016. 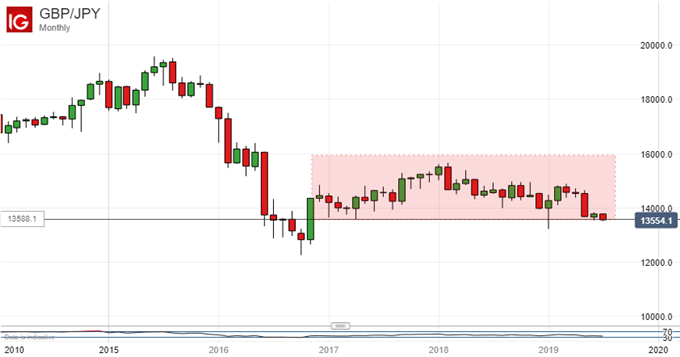 If this month doesn’t bring an appreciable bounce for the Pound, then the bearish prospect of the first close below that range is a clear danger. 135.88 will be the level to watch through July.